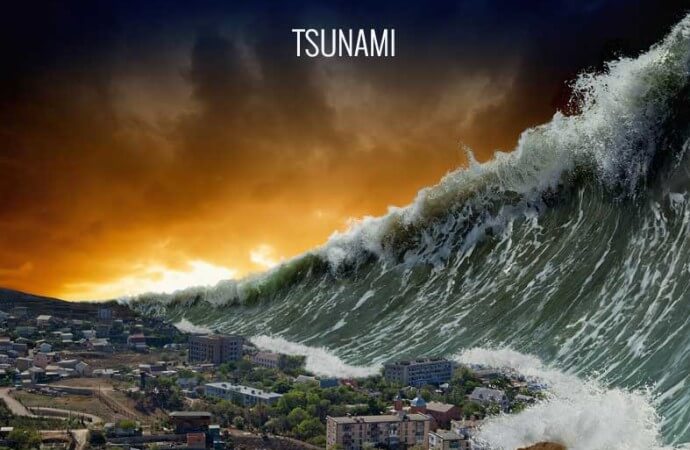 Coastal regions all over the world fear tsunamis for their suddenness and devastating impact on life and property. So what are the facts behind this fearsome phenomenon known as tsunami? Definition of tsunami Tsunami is a Japanese word which means harbour (tsu) wave (nami) that is now used all over the world to describe super

Coastal regions all over the world fear tsunamis for their suddenness and devastating impact on life and property. So what are the facts behind this fearsome phenomenon known as tsunami?

Tsunami is a Japanese word which means harbour (tsu) wave (nami) that is now used all over the world to describe super gigantic sea waves that sometimes arise to hit land. A tsunami is very different from regular waves that are created due to blowing winds. The cause of tsunamis lies deep down in seabed disturbances instead.

If we were to define tsunami, its definition would be that ‘a tsunami is a series of giant waves with extremely large wavelength that are borne due to an undersea disturbance such as earthquake, volcano eruption, landslide, meteorite strike or nuclear weapon hit’.

As the definition of tsunami summarizes, when one of these undersea disturbances occurs, the sea water in the affected region is displaced forcefully and waves are formed. Over the ocean these waves are neither very high nor very noticeable. But as these waves reach landward, they lose speed and gain height. Mind you, even at these comparatively reduced speeds, tsunamis are still fast enough to destruct and sweep away all that comes in their path. Regular tsunamis can grow up to 100ft (30 meters) in height by the time they hit land. That’s as high as a 10-storey building! As you know waves have height as well as width i.e. the distance between two crests of a wave (also called wavelength). Tsunami waves can have wavelength of 10 km to 500 km. Which means that a single tsunami wave can cover an entire town or even a big city!

A mega tsunami is an excessively high tsunami with wave height (or amplitude, to use the scientific term) that can go up to hundreds of meters. In recorded history, there have been many accounts of mega tsunamis.

One of these occurred on July 9, 1958 in Lituya Bay, Alaska, USA, where waves went as high as 1720 ft. or 524 m. Known as the Alaskan mega tsunami, this is the biggest and the largest tsunami in recorded history. In 1963, a 250 m high mega tsunami struck Vajont dam in Italy and swept away many villages and cost 2000 lives.

On December 26, 2004, a huge earthquake in Indian Ocean unleashed a massive trans-Indian Ocean tsunami spread across thousands of kilometers that left 23000 people dead across 11 countries including Indonesia, Thailand, Malaysia, Bangladesh, Maldives and India. Its impact was felt in east African countries such as Kenya, Somalia and Tanzania as well. It was one of the worst tsunamis ever and one of the biggest natural disasters in recorded history.

On March 11, 2011, an earthquake near Japan in Pacific Ocean unleashed a 10 m high tsunami. 18500 people lost lives and a nuclear plant at Fukushima suffered meltdown. You might remember hearing about this comparatively recent tsunami as it was much in news at that time.

As you can see from examples given above, tsunamis cause heavy losses of life and infrastructure. While tsunamis can cross thousands of kilometers very rapidly to strike out of the blue, a reliable and quick tsunami warning system (TWS) can still minimize damage by alerting people in time to evacuate coastal areas to minimize loss of life and reduce financial damages too.

Tsunami warning centers or systems work through a network of tsunami detecting sensors and a communication network to communicate alerts. Such systems can be international as well as local.

As the Pacific Ocean area is earthquake and tsunami-prone and has a long history of both, a Pacific Tsunami Warning Center (PTWC) was set up in Hawaii in 1949. The heavy toll of the 2004 Indian Ocean tsunami could have been much lesser had there been a tsunami warning system in place. Recognizing this, an Indian Ocean Tsunami Warning Systems was set up in 2006 to avoid future tragedies. There are several other tsunami warning systems in other parts of the world too. Now tsunami warnings are available 24×7 through SMSes as well.

Do you live in a coastal area? Is there any tsunami warning system in your region? Do you remember about reading or hearing about a tsunami? Share your thoughts in the comment section below.