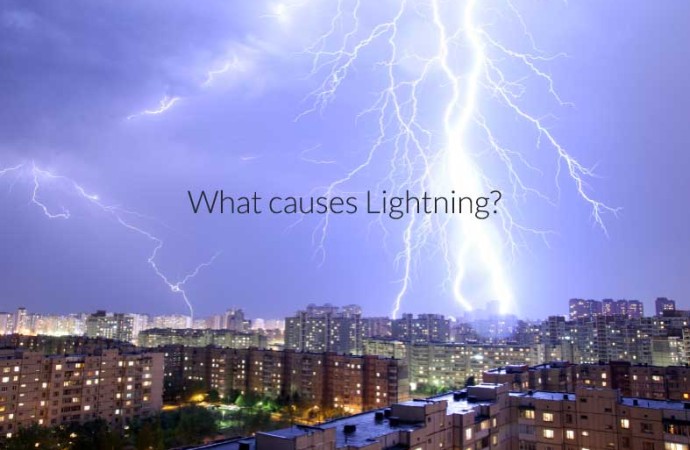 Lightning is bright and lightning is fast, when you blink the lightning bolt has already past. Before we look at what causes lightning, let’s first think about the question “what is lightning?” Lightning is an electric current that can form inside thunder clouds, between clouds, and between clouds and the ground. We see this electric

Lightning is formed when tiny particles called electrons suddenly move from one point to another. Electrons are so small that we cannot see them at all and they are also extremely fast! When lots of electrons shoot through the air in a certain path, they move so fast that they light up the air around them and we see a lightning bolt!

Wait a minute, where do the small electron particles come from? Electrons are subatomic (smaller than an atom) particles. Everything around us is made up of atoms. Your skin is made of atoms, all plants, animals, rocks…everything! Electrons can be found near the centre of an atom and they have a negative (-) charge of electrical energy. The electrons stay close to the centre of the atom because there are protons (positive (+) charged particles) in the centre of an atom. The protons and electrons pull each other closer, just like how two magnets attract each other.

Now that we know what lightning is and what it is made of, we can explore how it works! During a thunderstorm water drops inside the cloud is swept towards the top of the cloud by strong winds. The top of the clouds are extremely cold and the water drops turn to ice. Some of the ice drops get larger and get too heavy for the wind in the cloud to keep it at the top and it starts to fall back down. As the heavier pieces of ice fall back down, it crashes into smaller ice shards and water drops in the cloud.

We can identify different types of lightning by looking at where the
lightning takes place.

Thunder is the rumbling and grumbling sound that comes from the atmosphere when lightning strikes. Thunder is created when air expands very quickly. Because a lightning bolt has so much energy and moves so fast, it heats the air surrounding the electrons so that it is much hotter than the sun. When the lightning bolt is gone, the atoms in the air quickly cool down again. The heated air wants to expand and all the atoms in the air want to start moving faster. When the air cools down again, it wants to contract and the atoms wants to stay close to each other. This happens so fast that the atoms surrounding the lightning path starts to vibrate and causes a loud noise known as thunder.

Now that you understand more about how lightning works and how hot it is, you should realize how dangerous it can be. Always remember some of the following lightning safety tips when you hear thunder or see a lightning:

What would you power if you could store the electricity generated by lightning?