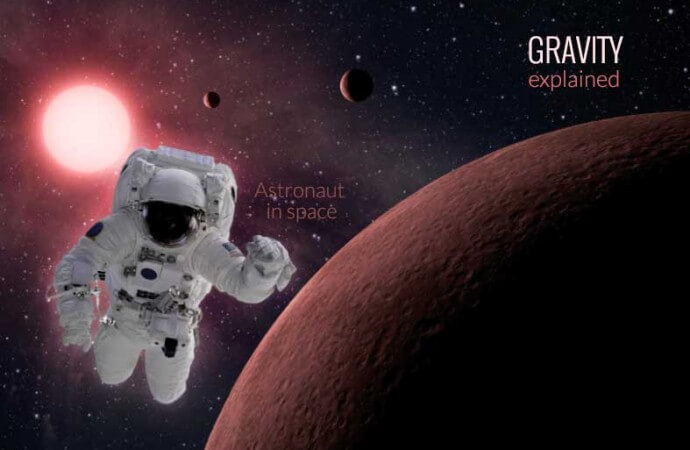 Have you ever wondered what stops you from floating away from the earth’s surface? This is all because of a force called gravity. Let’s find out how gravity works! The definition of gravity: The gravity definition can be explained by saying that gravity is the natural (not made by man) force, that a celestial body

Have you ever wondered what stops you from floating away from the earth’s surface? This is all because of a force called gravity. Let’s find out how gravity works!

The definition of gravity:

Gravitational forces can also be found between two massive bodies (objects) such as between the earth and the moon. These forces are stronger or weaker between the two bodies, depending on their mass and how far they’re away from each other. The way that these forces work, was explained by a very clever man that we will talk more about later. Wait a minute; I said that the forces between two bodies are stronger or weaker, depending on their mass! What does the word “mass” mean? Don’t get confused between mass and weight! Let’s investigate these two words, so that we can know exactly what they mean.

What is mass and weight and what is the difference?

To understand what mass and weight is, we should first take a look at what “matter” is. Everything that you can see around you and even yourself is made from matter. Every molecule and everything that takes up space is made of matter. The more “stuff” or matter there is in an object, the more mass it will have. All of you know that astronauts can float around in their space ship when it is far away from the earth. This is called zero gravity, because when the space ship is far away from the gravitational pull of a celestial body, you cannot be weighed down by its gravitational force. Even though the astronauts can soar through the air in the space ship, their mass still stays the same. Why? This is because their bodies are still made up from the same amount of matter. Your mass will stay the same even if you are on the moon, in the water, on Mercury (the first planet in our solar system) or when you visit every other planet.

When you stand on a scale you can measure your weight. Weight is the force on an object due to gravity. The mass of objects is very important, because it will cause objects to be pulled towards each other with a bigger force, when the mass is bigger. When you go to different planets your weight will vary, depending on the force of the planet that pulls you towards it. So, when you go to a bigger planet than earth like Jupiter (Fifth planet in our solar system) your mass will still stay the same, but your weight will be more. If you were standing on Jupiter and you would climb onto a scale, you would weigh much heavier. Now, if you went to the moon (much smaller than the earth) your mass will of course still stay the same, but if you should climb on a scale your weight would be much lighter. Imagine how high you could jump on the moon, because gravity on the moon will not pull you down as much as the gravity we know on earth.

Who discovered gravity and what is the law of gravity?

Sir Isaac Newton was the first person to discover gravity. Sir Newton was sitting under an apple tree and suddenly an apple fell out of the tree and hit him on the head. Instead of losing some brain cells, Sir Newton realised that there must be some force that pulls the apple towards the ground. He then called this force “gravity”.

Sir Newton wrote down the equation for the law of gravity and called it the “universal law of gravity”. This law says that any other object in the universe attracts every other object with a gravitational force, which lies between the centres of the two objects. His law also says that the more massive the objects are, the stronger the gravitational force between them will be. The final part of the law says that the force will become weaker between the two objects when they are further away from each other and that the force will be much stronger when they are closer to each other.

Now that you have all these gravity facts, would you enjoy it the most to soar around in a space ship with zero gravity or would you like to run and jump on the moon?