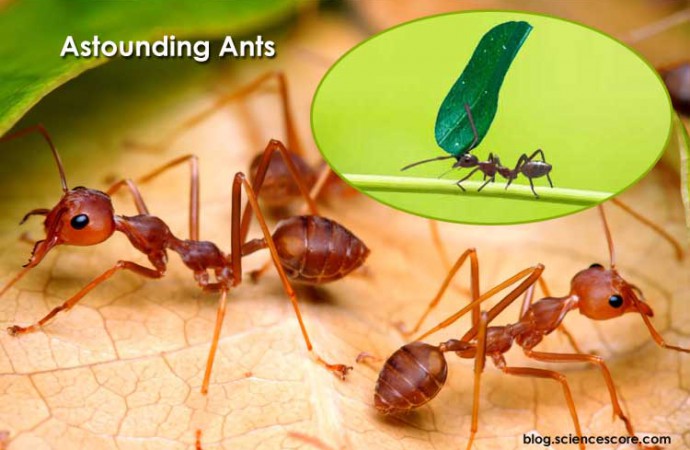 Imagine you’re standing in a room full of 50 kids just your size. Now imagine that you can pick all 50 of them up at the same time, and carry them around the room with you! If you could do that, you’d be as strong as an ant! Ants are incredible insects. They live in

Imagine you’re standing in a room full of 50 kids just your size. Now imagine that you can pick all 50 of them up at the same time, and carry them around the room with you! If you could do that, you’d be as strong as an ant!

Ants are incredible insects. They live in colonies, squished in with millions of their sisters. Each colony has a queen, who acts as mother for the colony. Her only job is to lay eggs, and she’s easy to spot, because she’s enormous. When she’s born, the young queen also has a pair of wings. After she uses them to fly off and find a mate, she will either detach her wings or the worker ants will chew them off, and she spends the rest of her life in the colony. This can be a long time: some queens live to be 30 years old!

Most of the ants in a colony are workers: females who can’t lay eggs. Worker ants can “talk” to each other using smelly chemicals called pheromones. Their antennae pick up the pheromones that other ants leave behind, and each smell sends a different message. One kind of pheromone is left by foraging ants to make a trail that other ants can follow to a source of food. Another kind tells ants in the colony what job a worker should be doing. And crushed ants release an alarm smell that sends nearby ants into a furious attack mode, so think twice before you decide to step on one!

What’s really amazing is that there are over 14,000 different kinds of ants, and some of them do some really strange things.

Leafcutter ants are actually tiny farmers! They have massive jaws that they use to carve circular pieces out of leaves. They drag this circles back to their nest, and use these leaves to make compost, or food, for the fungus that they grow in their underground nests. There can be over 5 million ants working in a single underground fungus farm!

Fortunately for us, we can learn our ant science online, because some ants use those powerful jaws to deliver a nasty bite if you get too close. Fire ants, for example, will bite and spray acid onto the wound – this feels just like getting burned by fire!

Some ants farm livestock instead of fungus. Some species of ants keep a colony of aphids, like tiny green cattle. Aphids make a sweet liquid called honeydew that ants like to drink, so when ants tap the aphids with their antennae, the aphids will make honeydew for them, just like milking a cow! The ants keep predators away from their aphids, and move them to new feeding grounds when the aphids’ food runs out.

Honeypot ants will choose certain workers, attach them to the ceiling of the colony, and stuff them full of food until their bodies swell up like a balloon. Imagine your stomach swelling up to the size of a small tent, and you might have some idea what it feels like. Then, when the other workers want a snack, they will walk up to one of these honeypots and drink the stored food from their stomachs!

So next time you walk over a patch of bare ground, step carefully; there might be an entire ant farm right beneath your feet!