Why is Pluto not a planet? 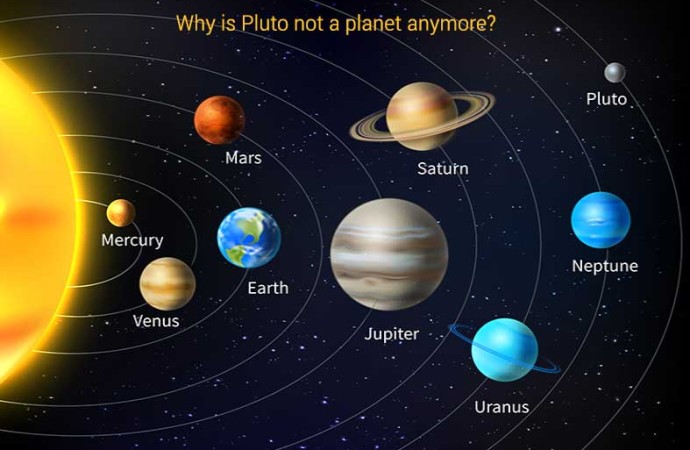 How many planets are there in our solar system? Did you answer 9? Hmm, that’s strange, because according to the International Astronomical Union, there are only 8 planets in the solar system. Are we sure? Well, let’ count them: 1: Mercury, 2: Venus, 3: Earth (our favourite!), 4: Mars, 5:Jupiter, 6: Saturn, 7: Uranus, 8:

How many planets are there in our solar system? Did you answer 9? Hmm, that’s strange, because according to the International Astronomical Union, there are only 8 planets in the solar system. Are we sure? Well, let’ count them:

Yes, it looks like there are only 8. Wait, what’s that? What about Pluto, you ask? Well, unfortunately Pluto is no longer considered a planet. It has been dethroned, and here’s why!

In the late 1800s, the planets were still being discovered by telescope-toting astronomers. Uranus had already been discovered and its orbit calculated, and it was suggested that there should be something pulling on Uranus to account for the shape of its orbit. Neptune was then discovered, but it didn’t account for all of the affects on Uranus. Therefore, people continued searching for another, far-out planet which was nicknamed Planet X. In the year 1930, the Lowell Observatory in the USA finally found the planet that they were looking for. The planet was also named Pluto in 1930. Pluto is a stone and ice body that orbits the sun every 248 Earth years.

Pluto is such s distant object that it was hard for astronomers to make observations and accurately estimate the size of this newly found celestial body. Initially, it was calculated that Pluto was roughly the same size as the Earth, but this was quickly downgraded by other estimates that put it at half the size of Mars. And things kept going downhill for poor Pluto until in 1978, astronomers agreed that Pluto was nothing more than 0.002% of the mass of the Earth. This put it as piddling – only 1/3 the size and 1/6 the mass of our moon! Even still, this relatively small, far-away body (its elliptical orbit brings it between 4.4 and 7.4 billion kilometers from the sun) was heralded as the 9th planet in our solar system, and this fact was taught to schoolchildren around the world.

Why is Pluto no Longer a Planet?

So then what happened? Why did a once glorious planet have to be downgraded to a dwarf planet? It all has to do with Eris. In 2005, yet another large body with a really long orbit was discovered by a team of American astronomers. This new body was estimated as being a similar size as Pluto, though possibly heavier, and it was announced that our solar system now had 10 planets! Did you ever hear about planet Eris? It turned out that the International Astronomical Union thought these 2 newest planets really didn’t compare to the other 8 planets in our solar system. A planet, they say, is a large body big enough to round itself through its own gravity and to clear its surroundings of planetesimals (other large but not planet sized bodies – they would be attracted by the planet’s gravity and stuck to it), but not so massive that it can cause nuclear fusion, like a star. Because Pluto is small and hasn’t cleared out the other objects in its orbit path, it just doesn’t cut it as a planet anymore.

As of 2006, Pluto and Eris were rejected as planets, and downgraded to dwarf planet status. So we’re back to 8 planets in the solar system.

Pluto in the News

Even though Pluto is not a planet any longer, it still has a place in our hearts and is therefore the subject of research and even space missions. On 4 July 2014, Pluto reached the closest point in its orbit to the Earth, and won’t be so close to use again for another 200 years.

Also in the news is that NASA’s New Horizons mission, which was launched in 2006, is schedule to fly past Pluto and its moons in July 2015 and that spacecraft will take pictures of Pluto’s surface and samples of its atmosphere, if all goes well.

What do you think about Pluto – should it still be called a planet or do you agree that it should have been downgraded? And what do you think it will look like when we get pictures of the surface next year?