What is the green house effect? 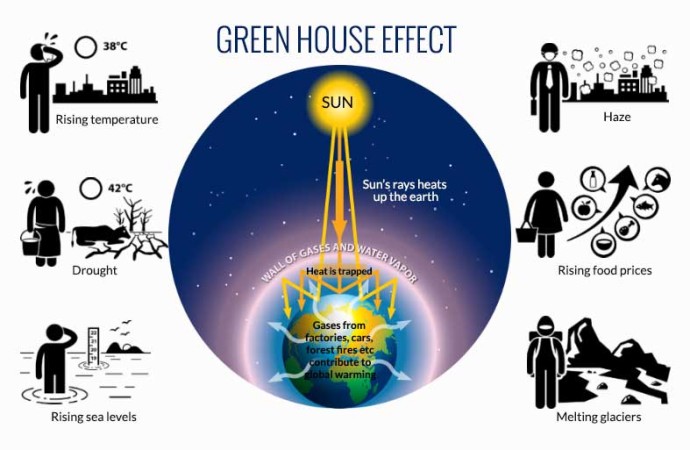 How does the greenhouse effect work?

Is the greenhouse effect bad?

Radiation and the greenhouse effect:

Not all the energy is absorbed and the extra energy is radiated in all directions. So, the waves have less energy when it is radiated back from earth. The shortwaves from the sun loses some of its energy in the form of heat, as soon as it makes contact with particles in the atmosphere or with the earth’s surface. The shortwaves turn into longwaves (infrared light) and particles in the air does not easily allow longwaves to pass and escape into space. The energy from these long waves is just re-absorbed and the atmosphere holds more and more energy as heat.

Kids, do not sit in the car for too long on a warm day. The same thing that happens in the atmosphere, and that is called the greenhouse effect, happens in the car! The rays from the sun can enter the car with shortwave energy and the rays will lose energy by giving heat energy to the atmosphere in the car, the car interior and exterior. Longwaves will just bounce around in the car and give of more heat. It will not be too long before the car will become very warm inside. This can be very dangerous!

Now that you understand what the greenhouse effect is, you can tell everyone more about it! How do you think we can try to control the amount of carbon dioxide in the air?