Why is the sky blue? 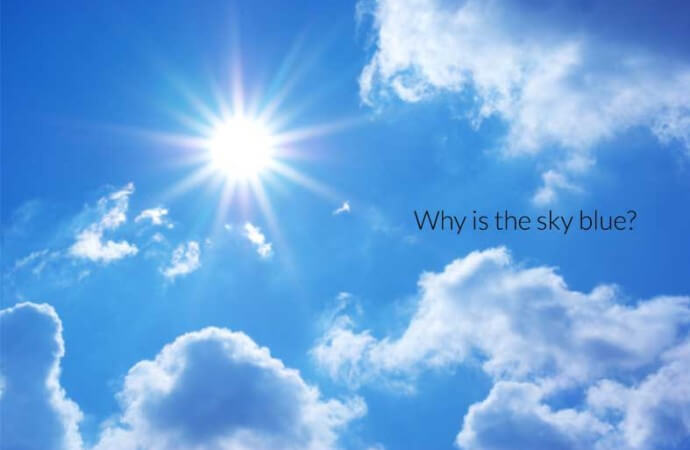 One of the most popular questions in the world, and one that leaves mothers and fathers scratching their heads, has got to be “Why is the sky blue?” The truth is that the sky changes colors in different places and at different times. At night, it’s black with shiny specks, sunrise and sunset can show

One of the most popular questions in the world, and one that leaves mothers and fathers scratching their heads, has got to be “Why is the sky blue?” The truth is that the sky changes colors in different places and at different times. At night, it’s black with shiny specks, sunrise and sunset can show hues ranging from orange, to pink, to red, and on gloomy days, grey or white is about all you see. But on a clear, sunny day, the sky really is blue. Do you have any idea why?

In order to understand why the sky is blue during the day (and other colors at other times), it’s important to understand a couple of things first. One is what the sky is made out of (which we’ll talk about later) and the other is that light comes in many different colors. That’s something you must know already, because you’ve definitely seen different colors of light before. But did you know that “white” sunlight contains all the colors of the rainbow? When light of many colors (red, orange, yellow, green, blue, indigo, violet) mix together, you get white light.

When you let white light pass through a piece of glass, especially a prism, you will be able to see white light break up into all the other colors. We call this dispersion, and you also see this in rainbows, because light passing through raindrops can also break up into different colors. Notice that these colors are always in the same order (ROYGBIV). This is because each colour of light represents one wavelength of light energy. The wavelength is the distance between the tops of 2 waves. Colors with long wavelengths, such as red and orange, don’t bend so much going through glass or water. Colors with short wavelengths, such as blue, indigo, and violet, bend a lot more, so when you break up white light, you’ll see violet bending the farthest “off course”. You should also know that red light has the longest wavelength and the least amount of energy, while violet light has the shortest wavelength and the most energy.

Let’s change directions for a minute and talk about the composition of the atmosphere. That’s a fancy way to say “what’s in the air”! The atmosphere is the sphere of air that surrounds our planet, separates us from the cold vacuum of space, and protects us from the radiation of the sun. The atmosphere is made up of the air we breathe (mostly nitrogen, 78%, and oxygen, 21%, with a bunch of other gases in tiny amounts), but also of drops of water vapour, ash and smoke particles from fires, and fine dust.+

Why is the Sky Blue!

Now we get to put it all together. Why is the sky blue? The short answer is that there is a lot of stuff floating around the earth. When white light from the sun passes through the atmosphere (which is a mix of gas, liquid, and solid particles), higher wavelengths of light tend to be little affected by the particles. Light of shorter wavelengths, such as blue light, are more seriously affected. This light strikes atmospheric particles and gets scattered around in every direction. This fills up the sky with blue light, especially at 90 degrees away from the sun. When you look directly in the direction of the sun, you see more of the light that comes directly from it and isn’t scattered, so the sky around the sun looks whiter.

We’ve already explained the blue sky during the day, but what about the reddish sky you can see during sunrise and sunset? Why is the sunset red? Well, the earth slowly turns around all day, so the sunrise and sunset look like the sun is coming up or going down at a low angle to the earth. At a low angle, the light has to pass through more air to get to our eyes than when the sun is straight overhead. More air means even more scattering, so the blue wavelengths at sunset get scattered so much that they can hardly be seen anymore. This leaves the longer wavelengths (red, orange, yellow) coming straight to your eyes and delivering beautiful scenes!

So that’s why the sky is blue (and sometimes red).