who invented the car? 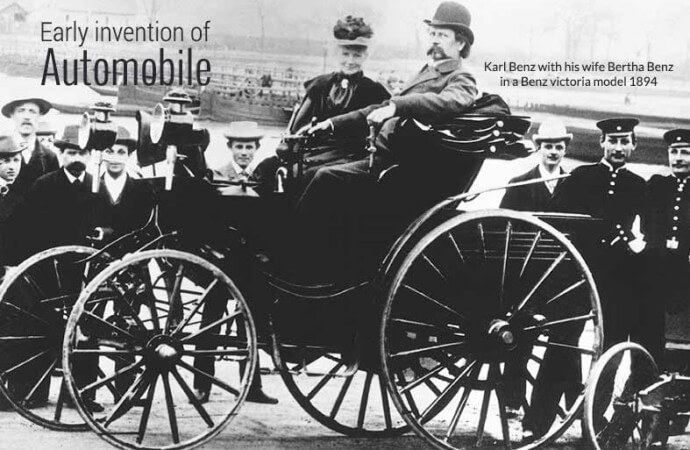 It can go fast and it can go far, where would we be without the car?! A lot of us use a car or some sort of public transport on an everyday basis. Since cars were invented cities started to grow and new cities started to form rapidly. This happened because people could move further

It can go fast and it can go far, where would we be without the car?! A lot of us use a car or some sort of public transport on an everyday basis. Since cars were invented cities started to grow and new cities started to form rapidly. This happened because people could move further and faster to and from their homes and the car started to serve as an “explorer craft” for mankind. As improvements were made to the car and its engine, it became faster and a much more comfortable way to travel than using a donkey or horse-cart.
People started to work on inventing the car many years ago. Have the question, “what year was the car invented?” ever crossed your mind? Let’s look into the history of the car so that we can find the answer to the question. Let’s also find out who invented the first cars, the mastermind behind this marvellous invention.

History of the invention of the car:

The invention of the wheel was a big step towards the invention of the car. People started to build carts (2 wheels) and wagons (4 wheels) that were pulled by animals. The design was improved by adding steerable axles (where the wheels are attached to the frame of the wagon/cart) so that a person could turn more easily. Springs and leather were placed between the axle and where it was fastened to the frame of the cart/wagon. This made the ride less bumpy (shocks that are placed in modern cars also help to make the ride less bumpy). The improvements made to the design gave rise to the coach/carriage. Some coaches or carriages had fabric tops to protect the passengers against the wind and rain.

People wanted to drive faster and further with their carriages and tried to think of new ideas to improve a carriage. Steam engines and electric motors were fastened to the carriages and animals were no longer needed to pull it. Can you see how the inventions improved and became more similar to what we call a “car” today?

When were cars invented?

In 1769 Nicolas Joseph Cugnot built the first steam-powered vehicle and called it the “steam wagon”. This was the first vehicle with wheels that could move with its own power! The vehicle had a boiler that built-up steam for it to move, but it had to be stopped frequently so that it could build-up enough steam. Inventors made the steam engines smaller and improved the design so that the vehicles could travel further before it had to stop and build-up steam. Unfortunately the engines were still far from perfect. The engines made a lot of noise; it huffed and puffed, clapped and popped, because it backfired. This did not stop the inventors from continuing with their improvement making process and the steam vehicle became quite popular.

The Electric vehicles that were developed between 1880 and the early 1900s were the next “big thing” towards the development of the modern car. Look at the world around us, with the high levels of pollution and global warming that has become a real problem. You may realize that the electric powered car was and is a much more environmental friendly alternative to petrol and diesel powered cars of today.

The electric cars were powered with batteries and introduced to a number of countries. These engines did not make as much noise and were not as expensive to power as the steam powered vehicles, but they could still not travel very far before their batteries had to be recharged.

Just a year after the “motorwagen” was built two engineers named Gottlieb Daimler and Wilhelm Maybach attached a four-stroke engine to a carriage frame and built the first car that even had four gears!

Now that we know more about the history of the invention of the car we can ask the question “When was the first car invented?” Was it in 1769, when Nicolas Joseph Cugnot invented the steam powered cars, was it in 1824, when Samuel brown built a gas powered car or was it in 1885, when Karl Benz built the “motorwagen”? We can see that a lot of inventors worked together to invent the car as we know it today. In between, there were more improvements and inventions, and some of them were not so practical or successful, but each and every one of the inventions played an important part in the invention of the car as we know it today.

What do you think will be the best power source for cars in the future?