Why do cats purr ? 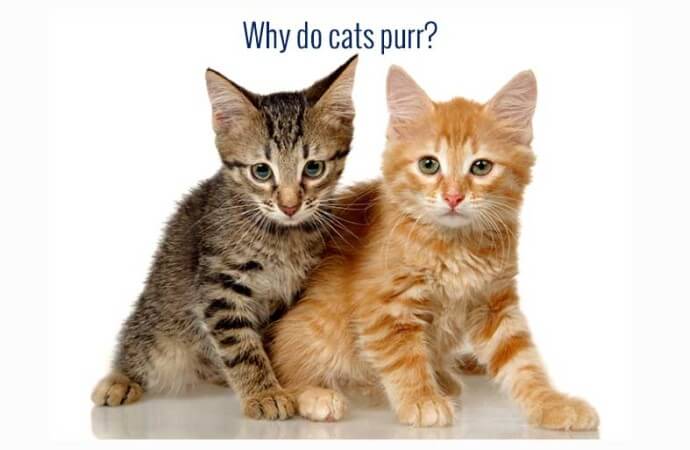 If you have a pet cat, you would know already that cats purr when being cuddled, stroked or petted by people they like. If your cat has ever had kittens, you would also know that cats and kittens purr very sweetly when nursing. Do you know that cats also purr when in distress or pain, or even when dying?

So what exactly is a purr and why do cats purr at all?

The purr is a buzzing and rumbling kind of low sound made by cats most often (but not always) to show contentment. Most animals (including human beings) make sounds or vocalize by passing air over the vocal folds present in a region called larynx in their throats. When meowing, cats use their vocal folds only to produce the sound. However for cats, purring is very different from meowing.

How do cats purr

Many animals can make purring sounds but only the cat family makes a true unbroken purr which involves using two sets of muscles- the laryngeal muscles present in throat, and the diaphragmatic muscles where the chest ends and the abdomen begins. Cats have the amazing ability to very slowly vibrate laryngeal muscles at the rate of 25 to 150 vibrations per second. These vibrations pass down to the windpipe (the passageway for breathing), and the diaphragm (the large muscle that keeps chest and abdomen separate), thus creating a rumbling and buzzing sound or what we call the cat’s purr. As cats can go on purring whether exhaling or inhaling breath, the purr feels like a continuous and unbroken sound. Purring is so low pitched that you can both hear it and feel it too. Some animal scientists liken purring to ‘opera singing for cats’!

It is an interesting fact that a feline (a member of the cat family such as lion, tiger, civet and the domestic cat etc) cannot both roar and purr. Domestic cats do not roar and lions don’t purr!

So what does it mean when cats purr?

So far as we know, cats purr for three reasons:

Those who have pet cats know that cats purr when they are happy. Cats have one particular purr that’s higher pitched than their regular ‘I am happy’ purr. This high pitched purr is persistent, a bit annoying and usually a demand for food.

Cats also purr when ill, in pain or distress. Scientists have found an amazing thing about purring. Apparently the purr is a self-healing mechanism for muscles and bones. The low sound frequency of a purr increases bone density and strengthens muscles. May be that’s why we find a cat’s slow purring so soothing!

A cat also purrs when nursing its kittens to bond and communicate with her tiny babies who are blind and deaf at the time of birth. As the purr is low pitched vibration that can be heard as well as felt, newborn and deaf kittens feel it and are reassured that their mother is close by and ready to feed them. Kittens too start purring within two days of being born to communicate with their mothers and siblings. As you may know, a kitten learns to first purr and then to meow.

So next time you hear your cat purring, pay attention. Does the sound break in between or does it feel continuous? Have you ever seen a distressed or ailing cat purring? Does your cat purr a bit differently when it is hungry? Do share your experiences.