Why Are Man hole Covers Round ? 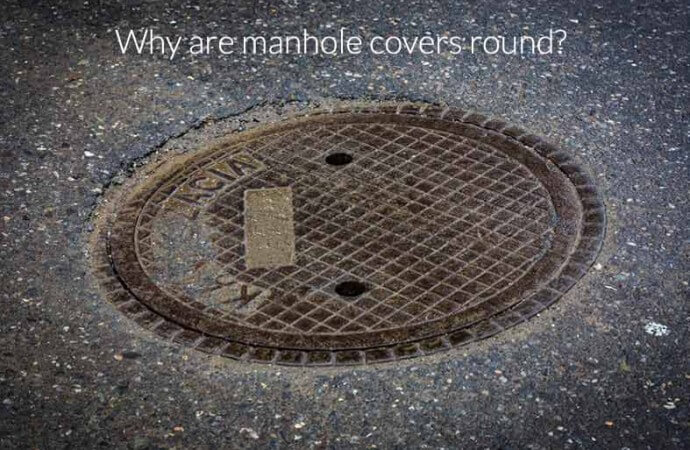 This may seem like a pretty strange question in general, but imagine coming across it on a test or an interview! You’re under pressure, trying your hardest to think and prove your intelligence, and then this is the next question you have to deal with – “Why are manhole covers round?”! What would you do?

This may seem like a pretty strange question in general, but imagine coming across it on a test or an interview! You’re under pressure, trying your hardest to think and prove your intelligence, and then this is the next question you have to deal with – “Why are manhole covers round?”! What would you do? What answer would you think of? Here are a bunch of ideas that people have already come up with to explain something that no one knows the original answer to.

To start with, it’s important to note that manhole covers are not always round in all countries in the world. However, many are. Why are manhole covers round? The easiest answer might be to simply say that they are round because manholes are round. Great answer, but it does create another, equally difficult question: why are manholes round? First, think of what a manhole is – a hole for people to use to travel down underground. Usually, these holes are used by technicians to access and inspect clean water, sewage, electrical and gas lines underground in cities. Although people can easily climb into round holes, they can also get into square or rectangular ones without any difficulty or danger. Can you think of any other reasons why manholes would be round?

Why Are Manholes Round?

Let’s look at the 3 basic shapes that a manhole, which is essentially a tube, can take: square, triangular, or circular. These tubes are buried in the earth and therefore need to have strong sides to resist being crushed by the weight of the surrounding dirt. Triangles are not bad at being compressed, but squares are – if pressure is put on two opposite corners, the square could fold in on itself. Circles and triangles are left, then, but in terms of strength, a chamber in the shape of a circle with an opening the same size as a triangle (and walls the same thickness) is stronger, cheaper, and easier to make. In short, for the shape of a tube, round is the winner every time.

Another idea is that when you put the cover on a manhole, which has to be very heavy to make it stay in place, do you want to spend time and a lot of energy getting it lined up exactly? Shapes with corners, like triangles and squares (let’s not mention stars!) have to be lifted up and turned to the exact spot before they will fall into place. A round manhole cover can be set in its hole quickly and easily, no matter which way it’s turned around. What about moving the cover when it’s out? A round cover can be rolled along, but if you’ve ever tried to roll a triangle, you’ll know it’s not such an easy feat. Finally, if the cover isn’t put back into the manhole correctly, part of it could sit up above the level of the street. If that was a sharp metal corner, it could cause an accident!

Area of a Circle

Something Special About Circles

If you have a manhole cover that fits perfectly into its hole, it can never fall through onto the head of someone down the hole, right? Well, not necessarily! If the cover is round, and if the edge has a lip or is slightly slanted, then you’re in luck – a circle is by definition the same width in every direction, so it can never fall into a hole of the exact same width.
What about a square? Try taking a square lid off of a square box. Can you drop the lid into the box? If you turn the lid so that its width lines up with the diagonal of the box (from corner to corner), it will be shorter and will always be able to pass through the hole! Well, this answer also takes some math to prove. Let’s call the diagonal of a square line c. Let’s call two sides of the square, which meet at a single corner, lines a and b. The length of line c can be calculated using Pythagoras’ theorem, which says that the square of line c will be equal to the square of line a plus the square of line b. Let’s have a look, for example on a 0.6 m wide manhole cover:
c2 = a2 + b2
c2 = 0.62 + 0.62
c2 = 0.36 + 0.36
c2 = 0.72
c = ?0.72
c = 0.85
Since 0.85 is longer than any one side of the square (0.6 m), a square cover would always be able to fall through a square hole of the same size, if lined up the wrong way.
Whew, that was a lot of reasons! But there may be more. Can you think of any other reasons why manhole covers are round?