How do magnets work ? 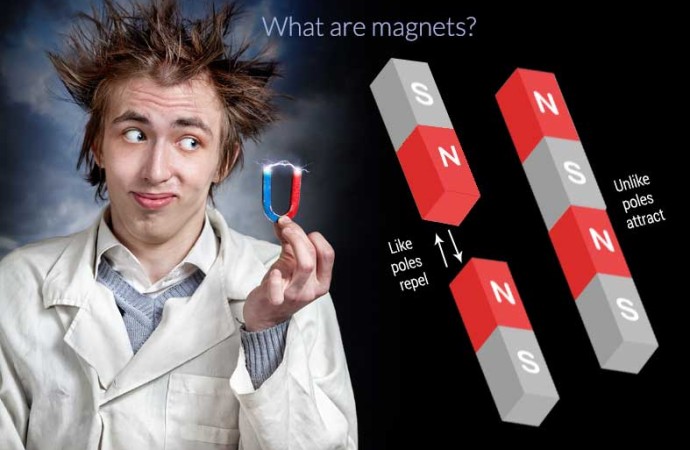 Magic or Magnetism Magnets are incredible. Some can hold up trains. Others help to store all the files on your computer’s hard disk. And some just stick notes and photos to your fridge. If you don’t know how magnets work, their abilities seem nothing short of magical! However, in this article we’ll reveal the science

Magnets are incredible. Some can hold up trains. Others help to store all the files on your computer’s hard disk. And some just stick notes and photos to your fridge. If you don’t know how magnets work, their abilities seem nothing short of magical! However, in this article we’ll reveal the science behind them, explain the different types, and talk about how they form.

If you’ve ever played with one, you certainly must have asked yourself “How do magnets work?” People have wondered the same thing for centuries, ever since discovering natural magnets, called “lodestones” and their seemingly magical properties. So how do magnets really work? The answer takes us down to the level of atoms and their important charged parts – electrons.

Atoms are made up of 3 types of particles: neutrons and protons in the core or “nucleus”, and electrons orbiting the nucleus. Different types of atoms have different numbers of electrons, and the electrons orbit and different levels. Every electron has a spin direction (some spin left and some spin right), and if they are in pairs, the 2 electrons spin in opposite directions and cancel each other out.

However, some types of atoms have electrons that aren’t in pairs. Because of this, the electrons orbit in different places but all have the same spin direction. They all spin the same way, and this gives that atom a magnetic charge.

Now that you know how magnets work, let’s look at some more of their properties.

First, magnets can stick to any other material that has a magnetic charge, especially metals like iron, nickel, and cobalt. However, they won’t attract materials that aren’t charged, like glass, copper, and plastic.

Next, a magnet has a magnetic field coming out of it from one end to another. We call these the north and south “poles” of the magnet. If you put paper over a magnet and pour iron powder on the paper, you will see the iron line up in a pattern that shows the magnetic field lines, which are normally invisible!

Have you ever heard of maglev trains? These are trains that don’t have wheels – instead, they float over the track because the bottom of the train is covered in magnets that have one pole facing down, and the tracks are magnets with the same pole facing up. They make the train “levitate”!

Magnets can also be made by running electricity through a metal, like iron. This will make the material produce a magnetic field, though it usually stops being a magnet when the electricity is no longer passing through it. Electromagnets are used in all sorts of electric appliances today, like computer hard disks, speakers, and motors!

Earth is a Magnet

Long ago, people realized that if the rubbed permanent magnets (like lodestones) in one direction, many time over iron pins, they also became magnetic. Their magnetic fields were weak, but they did all do something odd – if they were put on a piece of wood that floated on water, they always pointed one of their poles to the North of the Earth. This helped people realize that the Earth is a huge magnet! Scientists think that the Earth’s core is a ball of iron and nickel that generates the magnetic field which early explorers could detect using their needle-based invention.

Do you know what invention we’re talking about here? Where else can you see magnets used in your day-to-day life?