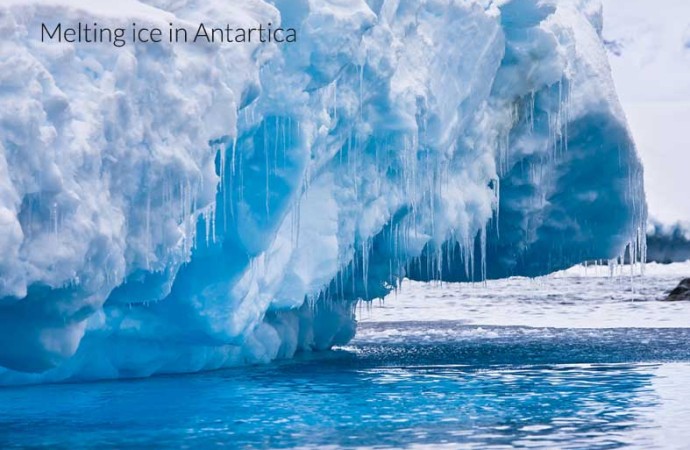 If you’re like the average kid out there, you’d probably have many questions about why this is happening, what caused it, and what the effects will be. In this article, we’ll try to explain the science behind the news so that you can have a better understanding of how important this event is.

Scientists studying glaciers and ice sheets in Antarctica found that the Antarctic ice sheet is losing ice twice as fast now as it was 10 years ago. Specifically, the glaciers that flow (slowly!) into the Amundsen Sea in Western Antarctica have been melting much more quickly than in the past. The scientists used satellite images to make observations, and found that Antarctica is now losing over 160 billion tons of ice every year. They say that this ice is melting into the ocean and may cause the entire sea level of the world to rise by 1 meter or more within the next 100 years.

What is Causing Antarctic Ice and glaciers to Melt?

According to the scientists who studied this area, the melting of the glaciers and ice sheets are happening for several reasons. Although much of the ice in the Arctic and Antarctic is sea’s ice that floats on the surface of the ocean, the Antarctic ice sheets are referred as continental ice, which means they lay over top of the land surface. Therefore, when this ice melts it runs down into the ocean and can raise the water level. The scientists think this is happening because the winds that blow around the coast of Antarctica are getting stronger and they are able to blow around and mix up the seawater. This means they can move warmer water towards the ice sheets on the coast and start to melt them.

Also, the ice sheets cover areas of land that are bowl-shaped, so when the edges melt, that melted water runs back into the bowl and helps to melt even more ice. This is why the scientists warn that nothing can stop the melting!
They also suggested that damage to the earth’s ozone layer over Antarctica, caused in part by some of the chemicals that people use, also increases melting. The ozone layer blocks a lot of UV radiation from the sun, and when it is think or has holes in it, more of the sun’s energy can hit the earth and cause it to warm up.

What Does Glacier melting and the Melting of the Antarctic Ice Sheet Mean?

Scientists warn that the current melting of the ice sheet in Western Antarctica could cause the global sea level to rise by 1 meter or more in the next 100 years. If this seems like a slow creeping flood, you’re right – but how long does it take to move a city out of the way? According to the United Nations, roughly 10% of the people in the world live in coastal areas that are 10 m or less in elevation higher than sea level. That’s over 700 million people who live in sensitive coastal areas, which means that millions of people around the world would be affected by sea level rise. Major cities like New York, Tokyo, Mumbai, Venice and Bangkok, would all be in danger of widespread flooding.

However, this is only the effect of flooding from increases in sea level. Such large amounts of melt water flowing into the sea can also have effects on ocean currents (the patterns in which warm and cool water flows around the world) and on weather by affecting winds and air temperatures.

What Can Be Done?

If you’re wondering what can be done about global warming in general, or about melting ice sheets in Antarctica in specific, there are many different ideas and a debate about whether or not it is people who are causing these changes to the climate. What isn’t being debated is that global temperatures are changing. People in areas near coasts, and even large rivers that drain into the ocean, should plan and prepare for change, and not assume that things will be the same in the future as they are now.

Do you live near the sea? What would happen if the ocean level rose by 1 meter? By 2 meters? How would that affect your life?