What does the pancreas do? 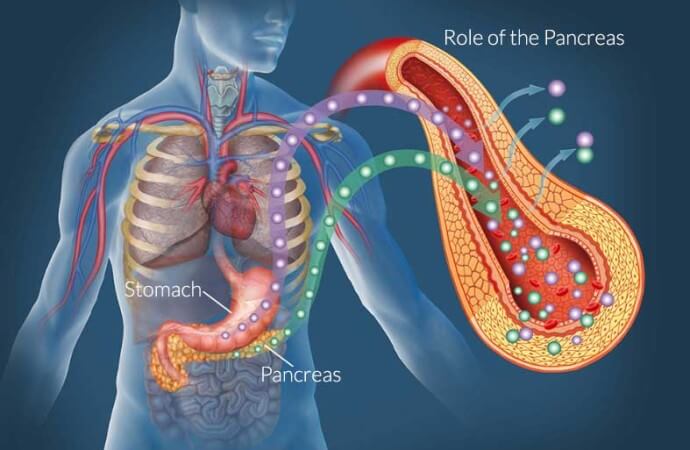 The pancreas is two glands in your body, but where is the pancreas located? The pancreas is found in your abdomen (belly) behind your stomach, where it is connected to the top part of your small intestines. The pancreas forms an important part of the endocrine (hormonal) system in the body, because it makes an

There are four very important hormones that are released by the pancreas that helps with the breaking down and building up processes of carbohydrates in the body.

1. A cells produce glucagon –helps to move glucose, fatty acids and amino acids from stores (cells and tissue in the body) into the blood.

2. B cells produce insulin –Increases the storage of glucose, fatty acids and amino acids in cells and tissue

3. D cells produce somatostatin – help to regulate the release of the other pancreatic hormones in the pancreas. In the brain and spinal cord it may act as a neurohormone (brain hormone) and neurotransmitter (brain chemicals that send information between cells in the brain and other cells in your body).

The pancreas makes pancreatic enzymes that help your body to break down carbohydrates (starch), fats and proteins, so that your body can absorb and use it.

Three very important pancreatic enzymes are:
1. Lipase: Breaks down fat.
2. Protease: Break down proteins and protects the body against parasites.
3. Amylase: Breaks down carbohydrates so that it can be more easily absorbed by your body.

Did you know that your pancreas can become inflamed? Inflammation of the pancreas is called pancreatitis. The most common causes of developing inflamed pancreas are alcohol and the presence of gallstones in your bile ducts. Some other causes of pancreatitis are:

Pancreatic cancer can be caused by damage to your DNA (molecules that contain your genetic material, for example information about what colour hair or eyes you have). DNA may be damaged because a fault or mutation might have been inherited from your mother or father. It might be damaged because of our own behaviour such as smoking or because of environmental contaminants.