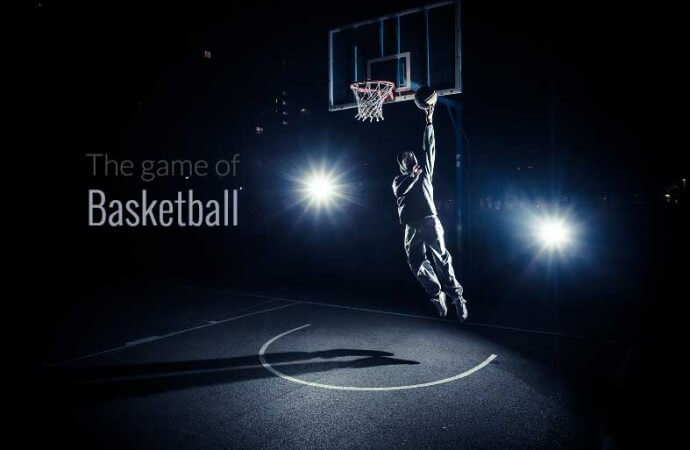 Run, bounce the ball, jump, fly through the air, and shoot the ball through the hoop! Basketball is a fun game to play and it is very enjoyable to watch. Dr. James Naismith was the person responsible for inventing this wonderful, action-filled sport in 1891. History about basketball: The first basketball hoops that were used

Run, bounce the ball, jump, fly through the air, and shoot the ball through the hoop! Basketball is a fun game to play and it is very enjoyable to watch. Dr. James Naismith was the person responsible for inventing this wonderful, action-filled sport in 1891.

The first basketball hoops that were used were actually peach baskets attached to high railings. The peach baskets were later replaced by a metal rim with a hanging net that was closed at the bottom. Basketball players had to poke the ball out of the net with a long stick or they had to climb up to retrieve it every time a goal was scored. In 1906, the bottom of the net was opened up, and the ball could fall through.

The first basketball that was used was a soccer ball. Later on basketballs were made by stitching leather panels together in a ball shape and by placing an inflated bladder on the inside of the stitched leather panels.

Dr. Naismith was a physical education teacher at a School for Christian Workers in Springfield, Massachusetts. He had to invent a fun and healthy indoor game for students to play during the cold winter months. The students enjoyed the game very much and it was not long before the game became a popular sport in many towns and cities.

In 1936, Naismith was sponsored by the National Association of Basketball Coaches to spectate as his invented game of basketball became an official Olympic sport at the Olympic Games held in Berlin.

The very first great college basketball coach, Forrest “Phog” Allen was coached by Naismith himself. Wilt Chamberlain, one of Allen’s players became one of Basketballs first superstars. Chamberlain scored a 100 points record during a game in 1962 and the crowd just loved him. If it weren’t for Naismith, who invented the game, the world’s greatest Basketball role models simply would not have been there to look up to.

If you enjoy Basketball very much and you do not have any space to play, you can play basketball games online. If you are completely new to basketball and have no idea how the rules work, an online basketball game can be a good start. Why don’t you try this fun basketball game? Just shoot the ball through the hoops!

There are lots of basketball games for kids and adults. These games are fun to play outside and anyone who joins in will learn valuable basketball techniques and skills needed to play a real basketball game, such as aiming, stamina and agility. A really fun basketball related game you can play is “Around the World”. This game will improve your aiming skills so that you will be able to become a master of shooting the ball through the hoop. Let’s find out how this game works!

Name of the game: “Around the World”

Amount of players: Any

Should I have a hoop? : No, Not necessary

Terrain: Can be played on hard terrain or grass

As many players as you want can take part in the game. Select seven spots in an arch in front of the hoop/paper against the wall (See Figure 1). You can mark out more or less than seven spots if you want. Mark the spots with chalk, rocks or even with the player’s shoes.

When the player took a “chance” shot and got the ball through the hoop, he/she can move to the next spot and go on with the game like before. When the player misses the “chance” shot, he/she has to return to the beginning and start again from the first spot, when it comes to be his/her turn again.

When a player reaches the last marked spot he/she wins and all other players can continue with the game to finish it.

Figure 1: Around the World

Now that you know more about the history of basketball you can watch a basketball game with even more appreciation. What is your favourite basketball related game?