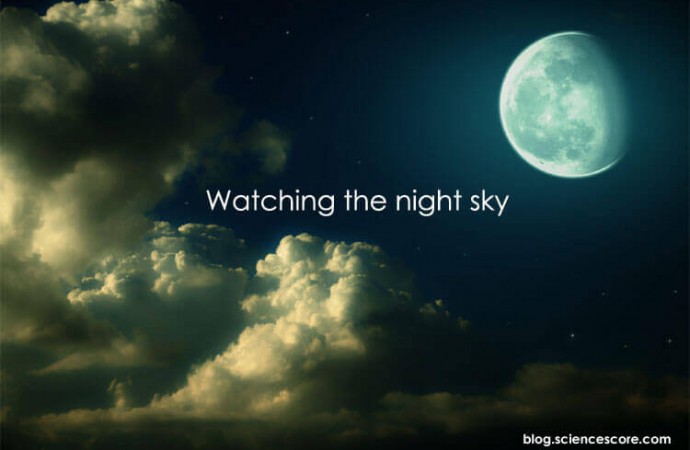 Hey kids, when you look up at the sky at night, what do you see? If you live in a city, you can probably see the moon and a few stars. But if you live out in the country, away from all the city lights, you can see a sky full of stars! But stars

Hey kids, when you look up at the sky at night, what do you see? If you live in a city, you can probably see the moon and a few stars. But if you live out in the country, away from all the city lights, you can see a sky full of stars! But stars aren’t the only things up there. The night sky is full of strange and wonderful things – if you know what to look for.

School science teaches us that there are eight planets in the solar system. The closest to the sun is Mercury, then Venus, Earth, and Mars. After Mars comes the asteroid belt; a ring of massive rocks floating in space. Beyond the asteroid belt are the giant planets: Saturn, Jupiter, Uranus, and Neptune.

The other planets are incredibly far away. To see just how far, we can build a scale model. You will need a lot of space! The sun needs to be about the size of a soccer ball, Earth would be a peppercorn, and Neptune would be a peanut.

That’s really far. But as far away as the other planets are, we can see five of them in the night sky. Mercury and Venus can be seen in the early evening; they look like really bright stars. Venus is the brightest thing in the sky after the moon! Mars has a reddish colour, and Jupiter is almost as bright as Venus. Saturn often appears very large because of its rings, and with a simple telescope, you can even spot some of its moons.

Sometimes, you can see something that looks like a star moving slowly and steadily across the sky. It’s not a UFO, it’s just one of the thousands of man made things we put into space. It may be a satellite, or space shuttle, or even the International Space Station. Be sure to wave at it – someone may be watching!

Other times, you might see bright streaks of light across the sky. These “shooting stars” are actually meteors – chunks of rock that are burning up as they fall through our atmosphere. Some even hit the ground! If a meteor reaches the ground, it becomes a meteorite. You can tell a meteorite by the black, burned coating on the outside, and it may have pits or craters in it from colliding at high speed with dust in the atmosphere.

Learning about constellations is very popular in school science. Constellations are stars that form patterns, like spotting shapes in clouds, and cultures across the world have made up stories for thousands of years to explain the patterns in the stars. Some of the most popular stories come from Greek myths; according to the myths, there is a giant lion in the sky, there are gods and goddesses, a winged horse, and even a scorpion. Look closely at the stars and see if you can spot the scorpion’s red heart!

One of the most spectacular things you can see in the night sky are comets. Comets are massive balls of frozen ice, rock, and gases. As they come toward the sun, they begin to melt, and the melting vapours stream behind the comet in a beautiful tail. It’s hard to tell when a new comet may cross the night sky, so be sure you look up from time to time. Who knows, you may discover something new!