Which mammal has the longest tongue? 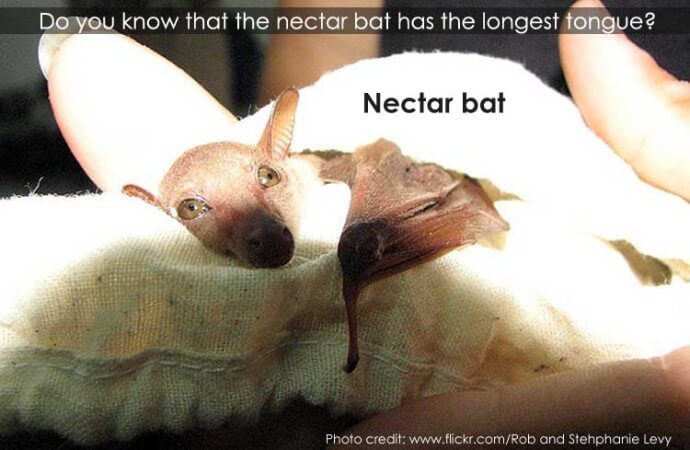 Try sticking out your tongue as far as it can go. Can you touch your chin with it? How about your nose? Some people can! Can you touch your ears with it? An anteater could clean its ears with its tongue. But there is one mammal who has an even longer tongue than that! The tube-lipped nectar bat has a tongue that’s one and a half times longer than its body! But why on earth would it need a tongue that big? Nectar-drinking bats serve an important role in their environments: they pollinate flowers. Without pollination, many flowers would not be able to reproduce (many things we eat, such as apples, nuts, cucumbers, berries, and pears wouldn’t exist without pollination). When a bat reaches a flower and drinks the nectar, pollen from the flower sticks to the bat’s fur. When it flies to the next flower, it transfers the pollen from the first flower and that plant can reproduce! But if you’ve ever looked at flowers, some make it harder to reach the centre of the flower than others, and the centre is where the nectar is. One such flower in Ecuador has an extremely long tube that leads to the nectar. Fortunately, the tube-lipped nectar bat’s tongue is just long enough to reach. In order to fit the whole tongue inside its body, the base of the tongue is in the bat’s ribcage!