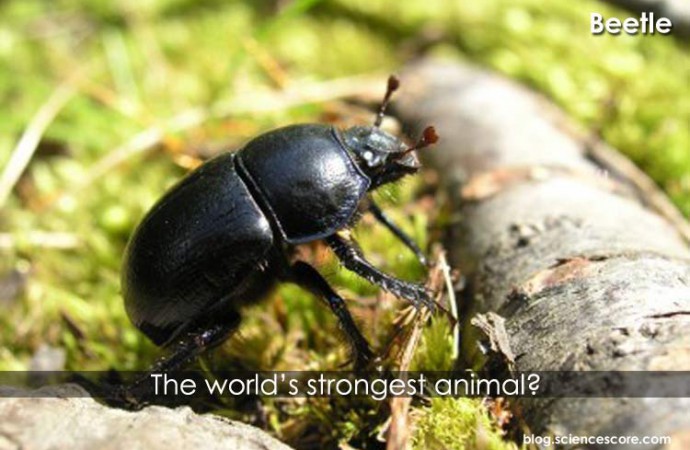 Hey kids, if you held a contest to find the strongest animal in the world, who do you think the winner would be? Would it be an elephant? Or maybe a giant squid? If we made all the animals the same size to make it a fair contest, the winner is an animal that can

Hey kids, if you held a contest to find the strongest animal in the world, who do you think the winner would be? Would it be an elephant? Or maybe a giant squid? If we made all the animals the same size to make it a fair contest, the winner is an animal that can lift 850 times its own weight. Imagine carrying around 850 of your friends!

Have you guessed it yet? The strongest animal in the world… is a beetle!

Beetles are incredible insects. There are more species of beetle than any other group of living things. In fact, one quarter of all known forms of life on Earth are beetles!

Beetles all share the same basic shape: they have a hard exoskeleton, a body with six legs, and two pairs of wings. The front pair is hard, like a shell, and makes a protective cover over the delicate inner wings.

We can usually tell beetles apart by this hard wing cover. For example, one of the most famous beetles, the ladybird or ladybug, has a red wing cover with black spots. Some wing covers can be extremely beautiful, in glittering metallic colours that make the beetle look like a little jewel. A fun fact about beetles is that they shed this hard outer shell as they grow, and you can find empty shells attached to trees and the undersides of leaves if you look carefully.

The strongest beetle is the rhinocerous beetle, which gets its name from the giant horn at the front of its head. The rhinoceros beetle is actually the strongest animal in the world – it’s the only one capable of lifting 850 times their own weight. Even ants, which are famous for their strength, can only lift 50 times their weight.

One of the scariest looking beetles is the stag beetle. Its jaws are so big that they look just like the antlers on a deer! They eat leaves and bark, but they can also deliver a powerful bite if you try to bother them, so it’s best to leave them alone.

Some beetles even like to swim. Whirlygig beetles swim around on the surface of the water, and spin in circles if they’re frightened. One fun fact about whirlygigs is that if they need to dive underwater, they take a bubble of air with them so that they can stay under!

Some cultures even see beetles as sacred. Scarab beetles are one kind of sacred beetle. Another name for scarab beetles is dung beetles, because they roll up a ball of dung, move it to a protected place, lay their eggs in the dung, and when the eggs hatch, the beetle larvae eat the dung! They live in Egypt where the desert meets the farmland, and this is also the place where Egyptian burials take place. Because of this, and the baby beetles’ habit of popping unexpectedly out of a ball of dung, they came to represent eternal life to the ancient Egyptians. There is even an ancient Egyptian story that says the sun is rolled across the sky by a giant scarab god!

So next time you spot a beetle when you’re out for a walk, stop a moment to give it your respects. After all, beetles can lift more than any other animal, turn into submarines, and roll the sun across the sky: that deserves a round of applause!