Biggest Dinosaur in the world discovered 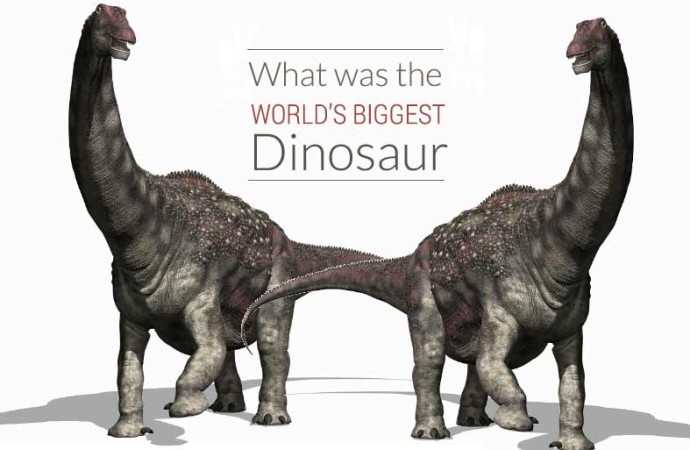 Scientists working in the dry deserts of Patagonia, Argentina have found what they believe is the largest type of dinosaur ever. After a farmer told them about finding massive bones, the scientists (known as paleontologists) managed to uncover more than 150 bones from the skeletons of 7 animals of this new species of dinosaur which

Scientists working in the dry deserts of Patagonia, Argentina have found what they believe is the largest type of dinosaur ever. After a farmer told them about finding massive bones, the scientists (known as paleontologists) managed to uncover more than 150 bones from the skeletons of 7 animals of this new species of dinosaur which they believe would have weighed 77 tons, or 77,000 kg!

This new type or “species” of dinosaur was uncovered in May, 2014 in an Argentinean desert. The bones were identified as belonging to the titanosaur family of suaropod dinosaurs, animals with large bodies, thick sturdy legs, long tails and necks, and small heads that lived from the Jurassic to the Cretaceous Periods. The type of titanosaur found has not yet been identified, but it is believed to have lived around 95 million years ago. The bones suggest that these dinosaurs would have reached an incredible height of 20 meters, and an astounding length of 40 meters from head to tail!

Wait, just how big is 72,500 kg? Let’s suppose you are a big kid or a mid-sized teenager. You might weigh something in the order of 40 kg, so how many of you would it take to tip the scales on this new giant? 72,500 / 40 = 1812! This means that you’d need a small army of you all just to balance out the weight of this incredible beast, but it doesn’t necessarily guarantee that you would have a fair fight. After all, all the yous would still be less than 2 m tall, so this titanosaur would be 10 times your height, or about as tall as a 7 story building. Not to mention, at 40 m long, one of these dinos would be longer than 3 normal buses! That’s a very big, very dangerous animal, even if, like all other sauropods, this new titanosaur was a vegetarian.

Just why did these ancient animals grow to such gargantuan sizes? No one knows for sure but there are several theories about why the sauropods and other dinosaur families grew so large. One reason might be that at the time these dinosaurs lived there was a lot of carbon dioxide in the atmosphere and that led to rich plant life, so they always had lots of food to chew on (although apparently sauropods didn’t really chew so much and preferred to swallow their food whole).

However, an even more compelling reason might be that plant-eating dinosaurs had to be big in order to protect themselves from big meat-eating predators. So it may have been a back-and-forth arms race, with predators getting bigger first, then herbivores, and so on.

A final explanation may lie in the dinosaurs’ internal heating. New studies have suggested that dinosaurs weren’t really hot- or cold-blooded, but somewhere in between. The bigger an animal gets, the better it can store heat inside of itself, because it has a much bigger body volume without such a big body covering (skin) that can lose heat. So if dinosaurs had trouble keeping warm, bigger ones would survive better and that might make dinosaurs get bigger and bigger!

In case you’re curious, there have been many other giant dinosaurs discovered over the course of history, of many different kinds. Though these new titanosaurs represent some of the biggest complete fossils ever discovered, however other colossal beasts have walked the earth. Here are some of them:

Amphicoelias fragillimus: This dinosaur species was identified in the late 1800s by a single, broken vertebra bone that was over 2 meters tall! Although various estimates put the size of the beast at between 40-60 m long, and its weight at anywhere between 65-120, 000 kg, nobody is certain since no other parts of the skeleton were ever found and the original fossil has been lost.

Argentinosaurus: Another sauropod, this dinosaur was named after the country, Argentina, where its fossils were originally found. Few bones have been discovered, but among them are vertebrae of 1.59 meters in length! This giant would have been anywhere from 22-35 m long and 60-88,000 kg in weight. However, because of the lack of fossils of this species, it is hard to know for sure its real body size.

Puertasaurus and Futalognkosaurus: These 2 types of giant titanosaurs were also discovered in Patagonia, Argentina, and represent species that may have been as big as the Argentinosaurus. Both were found in the past 15 years, and in a similar area to the latest titanosaur found. Their body sizes have been estimated from small numbers of fossils discovered as 35-40 m long and between 80-100,000 kg (Puerta) and 26-34 m long (Futalognko).

So we have a new contender for the heaviest and longest dinosaur, but more study and reconstruction is needed before accurate estimates of length and weight make it certain that this new titanosaur is the biggest dinosaur ever. But one thing is for sure – it was huge! What would you do if you ran into one of them in the forest?