Biggest volcano in the world Discovered 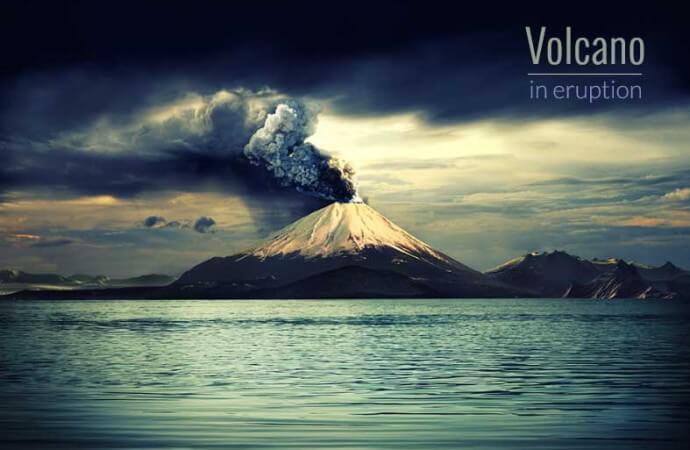 World’s Biggest Volcano http://www.bbc.com/news/science-environment-24007339 Do you have any idea where the biggest volcano in the world is? You may have heard of the Mauna Loa volcano of Hawaii, and that was indeed considered the world’s biggest volcano – until now. An extinct volcano discovered decades ago in the depths of the Pacific Ocean has just

Do you have any idea where the biggest volcano in the world is? You may have heard of the Mauna Loa volcano of Hawaii, and that was indeed considered the world’s biggest volcano – until now. An extinct volcano discovered decades ago in the depths of the Pacific Ocean has just been crowned the world’s largest!

After being discovered in 1993 and studied for twenty years, a giant volcano under the Pacific Ocean named Tamu Massif has been proposed as the largest single volcano on the Earth. It has an area of about 310,000 square kilometers and it measures 4.4 kilometers from base to peak – but its peak is nearly 2 kilometers under the surface of the ocean! Compared with the 5271 km2 area and 9.2 km height of the previous record holder, Mauna Loa, the Tamu Massif volcano is a very wide and flat monster, though both are shield volcanoes that formed in similar ways. People thought at first that Tamu Massif was a combination of 3 different volcanoes, however after studying the way that lava flowed and finding that it came from a central spot, scientists believe this underwater mountain is a single volcano, and the biggest ever found in the world!

This enormous volcano is many times bigger than anything currently active on Earth, but don’t worry, the volcano has been “extinct” (meaning it cooled down and doesn’t erupt anymore) for about 145 million years! That’s about when lava started to pour up and out of the volcano’s vent, which it did for the short time of over a million years. Because of the low, flat structure of the volcano, and the evidence of rapid cooling of its lava flows into rock, the scientists who studied Tamu Massif don’t think that it ever reached up above the surface of the ocean. Instead, the entire mountain was built secretly under the sea.

There are many different types of volcanoes, but the three main types are shield, cinder cone, and stratovolcanoes.

Shield volcanoes form over “hotspots”. These are areas where hot molten rock seeps upwards to the surface and can flow out as big, gooey lave flows. Shield volcanoes are usually the least explosive type, and for this reason their lava flows out slowly but steadily, creating a low, flat mountain in the shape of a shield.

The slow and steady build-up of shield volcanoes is what makes them form the biggest volcanoes in the world.
Cinder cones also form over hotspots but in areas where there are different types of rocks and a lot of gas and water in the volcano. This produces a volcano that is more explosive than a shield volcano, and one which has steeper sides with lighter rocks formed from the ash of the volcano’ explosions.

Stratovolcanoes are built up in layers and form steep mountains. They are made when heavy, wet ocean floor gets pushed down under lighter land. When it melts, the ocean floor stone is full of water which creates steam. Steam builds up under intense pressure, until at last an explosive eruption takes place. Stratovolcanoes can also alternate between ash and lave eruptions, so they are made off layers of different kinds of rocks.

Volcanoes, even teeny tiny regular ones (compared to Tamu Massif ) can be incredibly dangerous and destructive. The typical image of bright red lava shooting up into the sky and then oozing down the sides of a mountain represent shield volcanoes, whose biggest danger is the flow of molten hot lava. Stratovolcanoes, on the other hand, can really blow their tops! The incredible pressures that build up inside of them can cause earthquakes and massive explosions that can turn a whole mountain into a cloud of ash. Hot steam, ash, and heavy gases can also flow down the sides of volcanoes burning up everything in their paths. If their high peaks have snow on them, eruptions can melt the snow and mix it with dirt and ash to create huge and deadly mudslides. They can even shoot out huge chunks of lava or solid rock, quite accurately called “bombs”!

Have you ever seen a volcano in real life? Have you ever wanted to watch one erupt? Where would you go and what kind of volcanic eruption would you want to see?