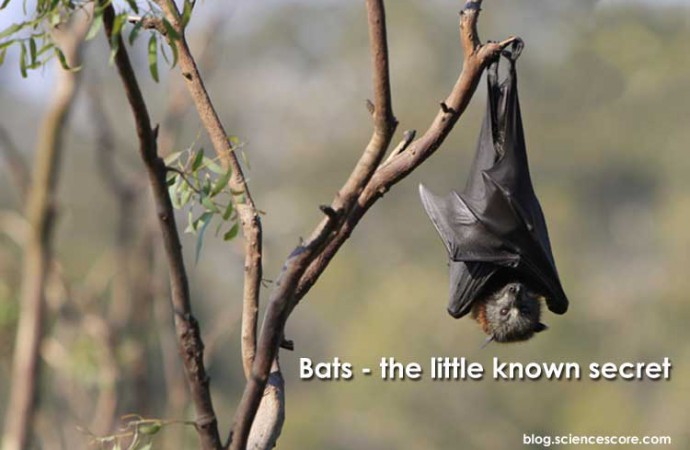 Hello kids. Here’s a fun trick to try at home: stretch out your hand. Spread your fingers as wide as you can. Wider. Even wider! Now imagine that each of your fingers was almost the length of your entire body (except for your thumb – that sticks up at the top) and glued together by

Hello kids. Here’s a fun trick to try at home: stretch out your hand. Spread your fingers as wide as you can. Wider. Even wider! Now imagine that each of your fingers was almost the length of your entire body (except for your thumb – that sticks up at the top) and glued together by a thin sheet of leather. Imagine your ears are as long as your whole head. And imagine that you can’t get a good night’s sleep unless you’re hanging upside down.

Have you ever heard the expression “blind as a bat?” Well, forget it! Bats aren’t blind at all – most can see almost as well as humans can. But imagine that you’re standing in the middle of a forest at midnight, with no lights around. You wouldn’t be able to see very well at all, would you? Bats have the same problem, but they also have a great way of getting around: echolocation.

Echolocation means “finding things using echoes”. To understand how it works, try this experiment: fill up a bowl, or a bathtub, or even find yourself a good puddle. Now drop something in, like a coin or a pebble, and watch the ripples. See what happens when the ripples hit something? The ripples bounce back. Sound travels through air just like those ripples in the water, and when sound hits something, it will bounce back too. This is how echoes are made.

Bats have managed to use this elementary science to help them get around at night. A bat makes a high-pitched noise, too high for humans to hear. When that sound hits something in front of it, the sound will bounce back toward the bat, and the bat’s giant ears act just like satellite dishes to pick up the sound. This tells the bat what’s around it, and it’s so accurate that it lets the bat do everything from avoiding branches in the dark to spotting a tasty meal as small as a mosquito.

The smallest mammal in the world is a bat! The bumblebee bat from Thailand weighs about as much as a penny, and is only 11mm long.

The biggest bat is the golden-crowned flying fox of the Philippines. When it spreads its wings, they measure 1.5 metres from tip to tip. That’s bigger than the average 10-year-old!

Many people think of bats as bloodsuckers, but most bats eat insects, some eat fruit, and some drink nectar from flowers just like a butterfly. A few eat smaller animals, and only 3 species of bats (out of over 1,000) drink blood. These so-called vampire bats from South America don’t actually suck blood, either; they lap it up from a tiny bite, and only take a few spoonfuls at most.

And no, bats don’t actually get stuck in people’s hair. Bats aren’t blind nasty bloodsuckers; they’re gentle fliers with a knack for nocturnal navigation. And that’s something worth going batty for!