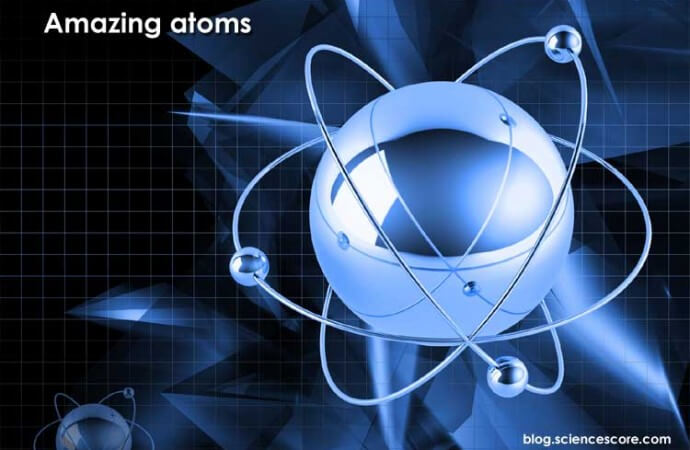 Scientists have been doing experiments like this for thousands of years, and a man in ancient Greece named Democritus figured out that every single thing in the universe – from the planets, to your lunch, to the clothes you’re wearing, to you – must be made up of tiny particles that can’t be cut anymore. He called these particles “atoms”, which in Greek means “uncuttable”.

Atoms are like those building blocks. There are over 100 different kinds of atoms, and by putting them together in different ways, we can make anything in the universe!

Atoms are so tiny that we can’t see them, even with the most powerful microscope on the planet. But scientists have been doing experiments for thousands of years to figure out what atoms looks like, and we know now that there are two parts to an atom. At the centre of the atom is a big core called a nucleus, which is made up of particles called protons and neutrons. Whizzing around that nucleus at incredible speeds are tiny particles called electrons, like moons orbiting a giant planet. But electrons are what make the world work the way it does.

Electrons are extremely small. You could fit 2000 of them into one proton. That means if the nucleus was the size of a coconut, one electron would be smaller than a grain of rice! But what’s even more amazing is that if we were to build a scale model of an atom, and used a coconut to represent the nucleus, we would have to put the electrons 500 metres away! That’s a distance of about 5 football fields!

So what does that mean? Most of an atom is empty space. The chair that you’re sitting on, the computer you’re using to read this, even your own body, is mostly empty space. The reason it seems solid is because of those whizzing electrons.

Think of the spinning blades of a fan. You can’t pass your finger through a fan without getting hurt, because the blades spin so fast that they act like a solid, even though there’s space between them.

Electrons work the same way. They move around the nucleus so fast that even though most of the atom is empty space, it acts like a solid!

So next time you paint a picture, or write a poem, or make something out of clay, take another look at it and remember: that’s pretty amazing for someone who’s mostly made of empty space!