Blood is a Battlefield 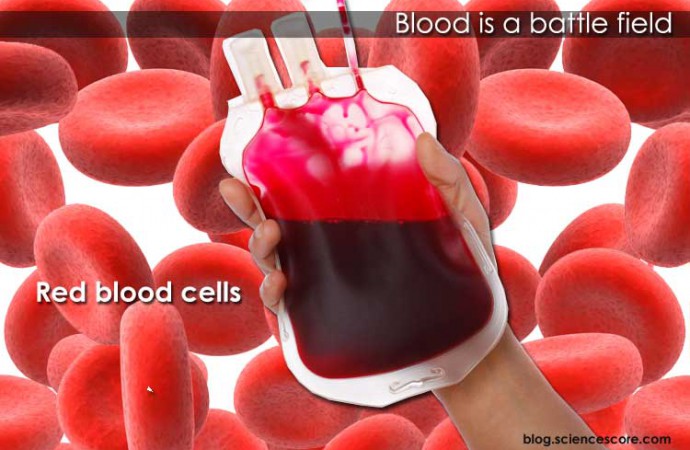 Have you ever pricked your finger and looked at the drop of blood that forms? In that one tiny drop of blood, there are thousands of living cells, and some of those cells are locked in a fight to the death! Our bodies are made up of trillions of tiny living building blocks called cells.

Have you ever pricked your finger and looked at the drop of blood that forms? In that one tiny drop of blood, there are thousands of living cells, and some of those cells are locked in a fight to the death!

Our bodies are made up of trillions of tiny living building blocks called cells. A cell is so tiny that you can only see one using a microscope. We have over 200 different kinds of cells in our bodies: hair cells, skin cells, blood cells, muscle cells – everything in your body is made up of different kinds of cells. And every single cell in your body will die without the oxygen we breathe in. So how does that oxygen get all the way from your lungs to the cells in the tip of your little toe? It’s carried by your blood!

Blood is actually made up of many different things, just like soup is made up of many ingredients. If you put a drop of blood under a microscope and take a look, most of what you’ll see are red blood cells. These cells are shaped a little bit like a doughnut, and their job is to carry oxygen through your body. They are bendable to fit through your smallest blood vessel, and almost half of your blood is red blood cells – that’s why your blood looks red.

Blood cells float in a liquid called plasma that helps to carry them around your body. If you take all the red blood cells out of it, plasma actually a pale yellow colour. It’s full of dissolved salts and other good things that help keep your cells healthy.

Any elementary science class will tell you to avoid cutting yourself because it lets your plasma and blood cells escape. Ouch! The good news is that your blood also contains tiny bits of cells called platelets. If you get a cut, platelets will stick to the edge of the cut and to each other. Eventually, so many platelets stick together that they form a plug, or clot, that stops any more blood from getting out. But sometimes, if the clot doesn’t form fast enough, some tiny invaders might find their way in.

Have you ever gotten sick and been told that you’ve caught a bug? What that means is that tiny living things called microbes have gotten into your body and are producing nasty chemicals that make you ill. Those same microbes can sneak into your body through a cut. Fortunately, you have some pretty tough defenders – your white blood cells!

So next time you prick your finger, remember that in that tiny drop of blood there are hundreds of living cells fighting against the nasty microbes that want to make you sick. Your tiny drop of blood is a battlefield, but luckily you’ve got the white blood cells on your side!