What is a Tornado? What causes Tornadoes? 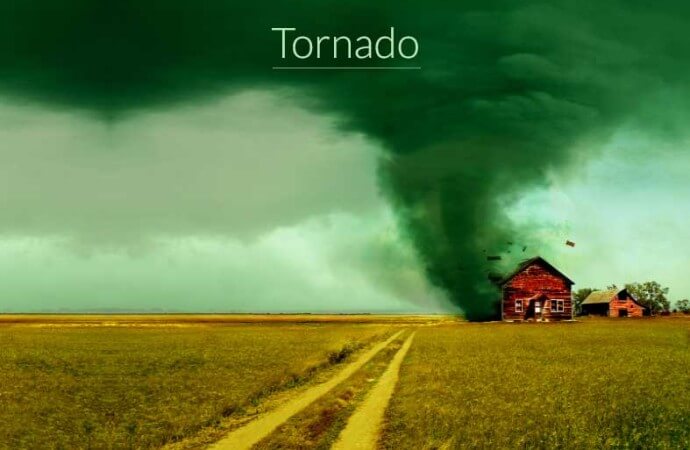 Tornado, twister, waterspout, cyclone – these are all names for one of weather’s fiercest and most destructive phenomena. Tornados can come in different sizes and levels of intensity, but one thing is for sure – you don’t want to get in the way of one! Their strong winds can rip up anything in their path,

Tornado, twister, waterspout, cyclone – these are all names for one of weather’s fiercest and most destructive phenomena. Tornados can come in different sizes and levels of intensity, but one thing is for sure – you don’t want to get in the way of one! Their strong winds can rip up anything in their path, from soil and trees to cars, people, and even houses.

What is a Tornado?

Though you may have seen them on TV or in movies, you may still be wondering “What is a tornado?” To answer very simply, a tornado is a spinning funnel of air that touches both the ground and a cloud at the same time. Before they touch the ground, these spinning systems start to reach down from the backs of clouds and are called funnel clouds. By the time they touch the ground, most tornados reach wind speeds between 137 – 177 km/h and are roughly 75-100 m across at their bases. Tornados generally touch ground only for a short time and pass over only a few kilometers of land before they slow down, lose energy, and start to fall apart. That’s lucky, because in just a few kilometers, a tornado can do incredible damage!

What is an extreme tornado? If winds nearing 200 km/h don’t seem extreme enough, there are certainly more powerful tornados to deal with, tough they happen with less frequency. Some of the largest and most powerful tornados ever recorded have measured several kilometers across at their bases where they touch the ground. They can reach wind speeds of up to and possibly over 480 km/h! And because they are so powerful and contain so much energy, some of these massive storms are able to touch ground and travel for tens of kilometers.
So what causes tornados, and how can they be predicted and avoided?

Normally, tornados don’t just come out of the clear, blue sky. Nor do they tend to happen so much on islands or near coastlines. In fact, nearly all tornados form over broad land areas which are already being hit by thunderstorms. Why is that? Well, it’s all due violent circulation of heated air, there are three main factors that cause tornados:

Weather scientists are able to predict when and where tornados may occur. This is important since tornados can destroy buildings, kill people and livestock, rip up vehicles, and knock down trees and power lines. They watch the build-up of storms over large continental areas, such as the famed “Tornado Alley” of the United States running between Texas, Kansas, Nebraska, where tornados happen every year. Thunderstorms usually have the most energy in the peak of summer when hot moist air rises in these vulnerable areas. They become their biggest and most violent at predictable times, and if winds speeds start to increase to violent levels, tornado warnings are issued.

At these times, it’s advisable to board up windows and stay indoors, preferably in low, strong structures like the basement of a house.

Here is a nice video that shows different types of Tornados http://youtu.be/S-UPAcKNvII

Has there ever been a tornado where you live or nearby? Do you have a plan and a safe place to hide from one, should that day ever come?

a. the short paragraphs,
b. sub headings that align to keywords,
c. simple sentence construction and

The key words are well placed and the keyword density is just nice.

I just added a video link which shows different types of tornados. I thought it will enhance this article. I will also be adding images appropriately.
On the whole I liked the article and the way it is written. So please proceed with the rest.