Why does ice float? 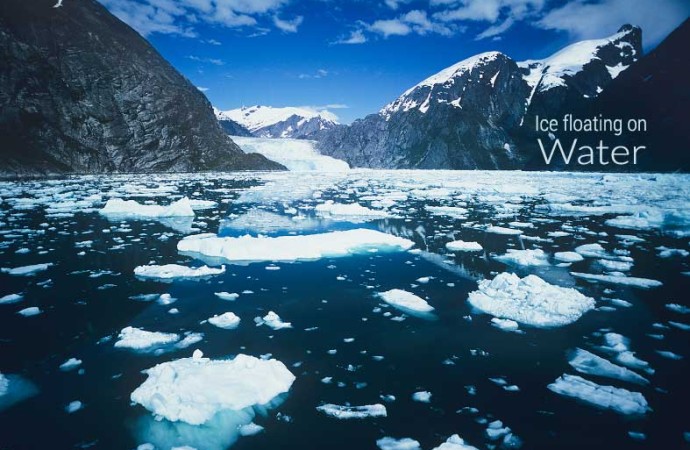 Water is something we can’t get away from. It’s in our bodies, in our environment, in our weather, and in our drinks. It’s hands down the most familiar liquid that most of us know, and we also see it in solid form (ice) and feel the effects of its gas form (water vapour or steam)

Water is something we can’t get away from. It’s in our bodies, in our environment, in our weather, and in our drinks. It’s hands down the most familiar liquid that most of us know, and we also see it in solid form (ice) and feel the effects of its gas form (water vapour or steam) most every day. But did you know that water is also one of the weirdest compounds around? It behaves differently from almost all other substances out there. Why does ice float on water while other solids will sink into their liquid forms?

What does it mean to say that something floats? When we talk about ice floating on water, we mean that the thing that is floating is denser than what it is floating on. Density means how much something weighs for its size or volume. For example, most wood is lighter than most stone (yes, there are types of stone, like pumice, that can float on water). Wood is less dense than water, which means that a 10 cm x 10 cm x 10 cm cube of wood would weigh less than a box of water the same size (even after subtracting the weight of the box). A stone the same size would weigh more than the water. This is why wood will normally float on water, while a stone will not.

The next step in understanding why ice floats is knowing that density changes with temperature. For almost every substance in the world, this rule holds true:
The colder a substance is, the more dense it is. The hotter a substance is, the less dense it is.
The reason this is true is that heat is a form of energy. When you heat up molecules, their atoms gain more energy which causes them to move around more. When they move around more, they spread out from one another and increase their volume, but since you still have the same amount of molecules over a spread out area, the substance becomes less dense. Solids that heat up enough will spread out so much that the bonds holding their molecules together will weaken and they will turn into liquids. Liquids heat up and separate even further, until they become gases.
One application of this is that most liquids fill up more space for the same weight if they are hot, and less space for the same weight when they are cold. If you want to fill up your car’s tank with benzene (aka petrol or gasoline), you should fill it up when the weather is cold. That way, you get more-dense fuel, or more weight for the same volume that you pump, and you can save money!

Think about throwing a rock into a lava field. What would happen? The rock would slowly wink through the gooey hot lava, right? The cold rock would be denser than the same type of rock melted, so it would sink.
So why doesn’t ice sink when you drop it into water? The obvious answer would be that ice must be less dense than liquid water, because it floats on water. That’s right, but shouldn’t it be the other way around? Ice is colder so it should be denser. Water is warmer than ice so it should be less dense. What’s going on here?

The explanation requires some chemistry. Oxygen atoms each have 6 electrons orbiting around in their outermost electron orbit, or valence shell. These electrons really want to bond with other electrons to make pairs, so when you introduce hydrogen atoms, each with a free electron, every oxygen atom will scoop up 2 of them and bond to bond with. This creates the water molecule H2O. Water molecules are roughly V-shaped, with the O at the base and the 2 Hs at the 2 arms of the V.

Finally, as water cools, just like more other substances it gets denser. But below 4?C (40?F), the water molecules start to get really close together and the charges in each molecule line up. As the water gets even colder and turns to ice, the positive hydrogen sides and negative oxygen sides of each molecule become important. Opposite charges attract and pull the molecules into a set orientation, but similar charges repel each other and cause the molecules to spread out. This stops water molecules from getting closer to each other while they get colder – and makes ice les dense than liquid water!

So icebergs float on seawater that is warmer than they are, and frozen ice cubes float in warmer drinking water. This is also why, if you put a full glass bottle of water in the freezer, it can shatter – the freezing water will expand and break the glass. Don’t do it!

What if water didn’t have this unique feature? How would all of the rivers and lakes in the world be different in the freezing wintertime?