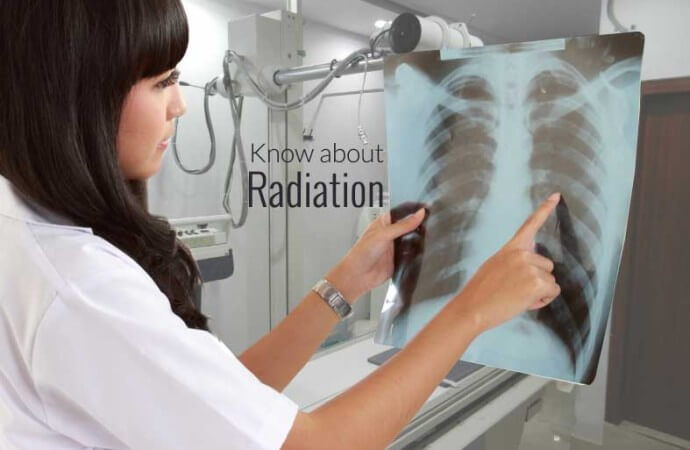 Do you know what radiation is? Let’s look at the word “radiation”. We usually say that sound is radiating from the radio or that heat is radiating from a heater. The use of the word “radiation” in these sentences gives us a clue of what radiation is. Let’s look at the definition of radiation so that you can visualize all the aspects of this phenomenon. The word “radiation” refers to energy that travels in the form of waves (invisible waves of energy, not the waves of the ocean) or in the form of tiny particles that move really fast. Heat is energy and radio waves are made up from small particles of energy!

Did you know that it is radiation from the sun that reaches our skin, and it is due to this radiation that we feel the heat from the sun? Heat can be transferred via three main pathways, namely: conduction, convection and radiation.

Let’s look at the meaning of these terms so that we can understand where radiation fits in.

Metal is a good example of a conductor of heat. When you have a really warm cup of tea and you place a cold metal spoon into your cup, the heat energy from the water is transferred to the spoon and the spoon will become warm as well. The spoon was heated because it came into direct contact with the very warm tea. This phenomenon is known as conduction.

Heat can be transferred via convection when a liquid or gas comes into contact with a solid body (material). When the surface of the earth has been heated by the sun, it heats the air directly above it. This heated air starts to rise and colder air takes its place, where after that air is heated and it also rises. This is called convection, where the heat was transferred from the surface of the earth to the air that was in direct contact with the air (gasses) above it.

We get many types of radiation, for example:

Radiation can be divided into two main types: ionizing radiation, which can cause cancer and nonionizing radiation that, can actually help us (except for some ultraviolet radiations). When we think of the word “radiation”, negative associations with the term tend to enter our minds.

One of the most famous nuclear disasters that caused large amounts of radioactive particles to burst into the atmosphere, on 26 April 1986, was the Chernobyl disaster in Ukraine. A nuclear explosion took place at the Chernobyl nuclear power plant and the radiation exposure caused thousands of people to die of radiation side effects, such as radiation induced cancer (especially thyroid cancer) and leukaemia. High levels of radiation that were released from the blast are still present in Chernobyl and areas that stretch up to 30 kilometres from it. Experts say that it is not safe to stay in these areas and even today, nobody lives there.

Now we just looked at how dangerous radiation can be, but did you know that radiation can save lives? Yes, Americium-241 is a radioactive element that is used to make smoke detectors work! Cobalt-60 is another radioactive element that is used to diagnose and treat cancers.
Did you know that there is a type of fungi that can live in Chernobyl? This type of fungi is called radiotrophic fungi and it appears that these types of fungi use its pigment, melanin, to convert radiation into chemical energy for it to grow.

Maybe someday people will be able to live in a radiation free Chernobyl again. What do you think? Do you know of any other methods that can be used to get rid of radiation in an area that has been contaminated with harmful radiation?