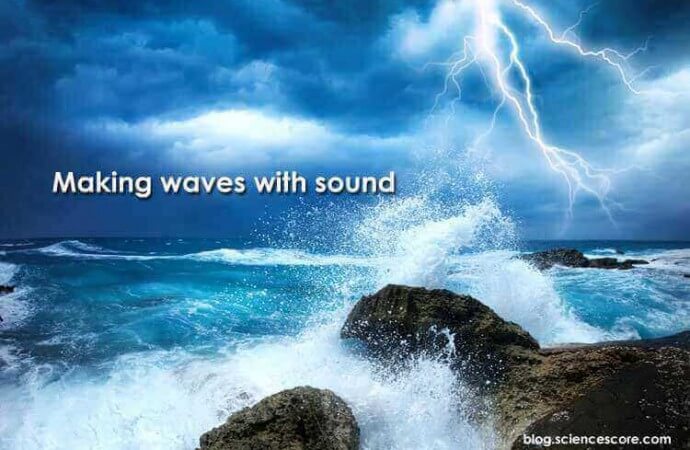 Hey kids, have you ever wondered why you hear thunder after you see lightning? Or why the horn on a car sounds different when it’s coming toward you than when it’s moving away? Or why things sound different under water? It all has to do with sound waves! Anything that vibrates makes a sound. Try

Hey kids, have you ever wondered why you hear thunder after you see lightning? Or why the horn on a car sounds different when it’s coming toward you than when it’s moving away? Or why things sound different under water? It all has to do with sound waves!

Anything that vibrates makes a sound. Try this: put your hand gently against your throat and hum. Can you feel those vibrations? That’s your voice!

You can see the way sound travels by filling up a tub or sink with water. Put your hand in the water and give it a quick wave. See how the wave your hand made travels through the water? Sound travels in just the same way!

Sound also travels differently depending on what it’s moving through. If you had a microscope more powerful than anything on the planet, you would be able to see that everything around us is made up of tiny particles called atoms. The atoms in a gas, like air, are far apart and whizzing around. The atoms in a liquid are closer together, but slosh past each other. The atoms in a solid are packed tightly together and locked into one shape.

When sound waves travel through air, the atoms are spaced so far apart that it’s hard for one group of atoms to reach the next group to pass the sound wave along. Sound waves in air fade away very fast.

Because the atoms in liquid are much closer together, it’s much easier for them to bump into each other and pass the sound wave along. But the best thing for sending sound waves along is a solid. Have you ever seen a movie where someone puts their ear to the ground to see if someone is following them? That’s because solid rock carries sounds faster and farther than air!

You can try this experiment with a friend. Find a long metal fence, and stand at either end of it. Put your ear to the fence, and have your friend tap the other end with a rock or stick. You should be able to hear the sound twice – once through the fence, and again through the air!

You can also hear that sounds are much louder in solids than in air. That’s why spies in movies will listen to a conversation though a wall by putting their ear against a glass. The solid glass makes the sound louder!

So remember next time you’re dancing to your favorite songs to take a look at the speakers and watch the vibrations. Those simple smashing atoms can make some really amazing beats!