What is the speed of light? 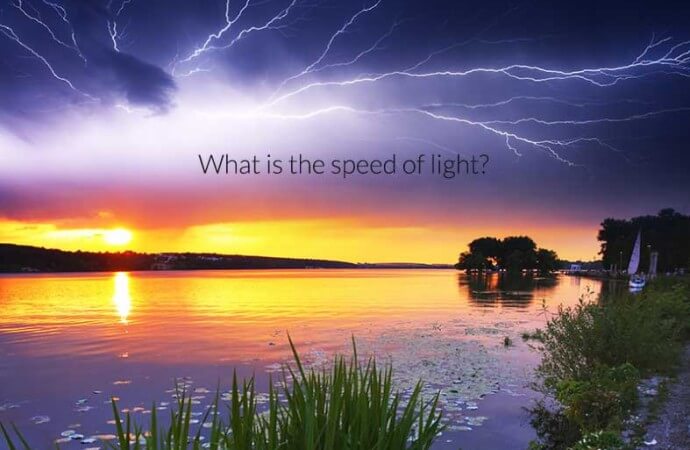 The definition of the speed of light is an important question in physics and one which has only been considered for the past thousand years or so. Ancient philosophers believed that light existed as a type of substance, and that it simply was or was not in a place, but did not move. However, more

The definition of the speed of light is an important question in physics and one which has only been considered for the past thousand years or so. Ancient philosophers believed that light existed as a type of substance, and that it simply was or was not in a place, but did not move. However, more philosophers and scientists began to think about light, how it reflects, changes, and affects objects as energy and they concluded that light must move. If something moves, then it must have a speed. Although some people believed that the speed of light was infinite, since it moves through space with nothing to slow it down, we now know that light does move at a set, but extremely fast speed, above which nothing has been seen to travel.

How Fast is the Speed of Light?

The speed of light is fast. Really, really, really fast! According to the latest measurements, light travels (in a vacuum) at a speed of 299 792 458 meters per second (m/s). If you want to know how fast the speed of light in miles is, that’s 186,000 miles per second (mil/s), which is the same as roughly 671 million mph. Remember that these incredible speeds are showing us how fast the speed of light is in a vacuum, which is a space with no matter in it to slow the light down. In other words, this is the maximum possible speed that light can travel. This also means that everything we can sense using light has already happened before we can sense it. For example, at an average distance of about 150 million km apart, light from the sun takes about 8:17 minutes to travel to the Earth. If something happens on the sun, like an enormous explosion, we’ll only learn about it 8 minutes after it happens!

Speed of Light Through Other Materials

Space is essentially a vacuum, though not a completely pure one since there are still particles floating around out there, just in very, very tiny concentrations. So when light travels through space, it is more or less travelling at the maximum speed possible. Here on the Earth, we don’t live in a vacuum, quite thankfully! For that reason, it’s important to know how to calculate the speed of light as it travels through various transparent materials or “mediums”.
Every medium has what’s called a refractive index. This is a value that represents how much the atoms in that material slow light down. To find out the velocity of light through any material, we can use the equation:

v is the velocity of light through the medium

c is the absolute speed of light through a vacuum

n is the material’s refractive index

How Is The Speed of Light Calculated?

People began experimenting with measuring the speed of light by making calculations based on shining a light towards a mirror that was a known distance away and measuring very carefully and accurately how long it took for the light to travel to the mirror and then reflect back to the observer. These old techniques from the 1800s still gave fairly accurate results, such as Leon Foucault’s 1862 measurement of 298 million m/s. These days, more complicated and sophisticated techniques are used, and extremely accurate measurement of the speed of light has been performed using lasers.

Faster Than the Speed of Light?