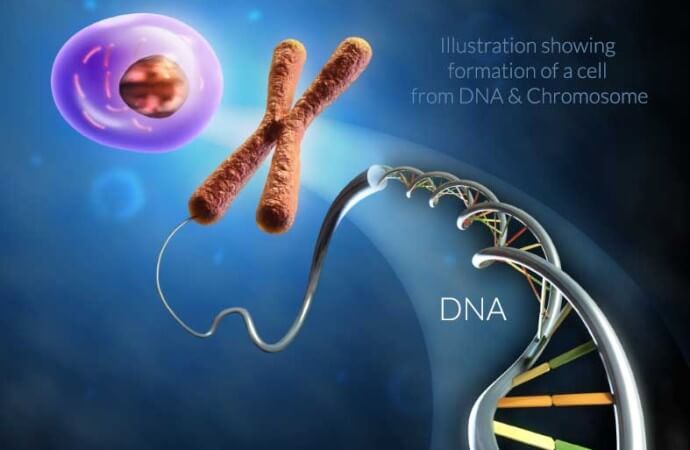 Once upon a time you were incredibly tiny. In fact, you were made of just one very small cell. The amazing thing about that very small cell was that all the instructions to make you were hidden inside it. All because of a very important molecule, called DNA. DNA Definition, understanding what DNA does and

Once upon a time you were incredibly tiny. In fact, you were made of just one very small cell. The amazing thing about that very small cell was that all the instructions to make you were hidden inside it. All because of a very important molecule, called DNA.

DNA Definition, understanding what DNA does and where it came from?

What does DNA stand for? DNA is also called by its complicated name: Deoxyribonucleic Acid (say: dee-ox-see-ri-bo-nyoo-clay-ik) acid. It tells all the cells in your body what, when and how to do something. It tells you when to start forming a nose on your face and what it should look like, what your hair and eye colour should be, and how your heart should form. DNA even instructed cells in your body on how and when your brain and arms should be formed, while you were still in your mother’s womb. All the cells in your body contain identical copies of DNA and no other person in the whole world has the same DNA as you.

Now you may be wondering where your DNA came from? Your DNA comes from your mother and your father. It is perfectly mixed so that you have a unique combination of DNA sequences that are packed with information.

Friedrich Miescher was the person who discovered DNA. Now that everyone knew that DNA existed, more scientists began to study DNA. The double helix structure of DNA was first discovered by James Watson and Francis Crick.

Where is your DNA hidden and what does it look like?

A DNA molecule is so small that you need a very good microscope to see it. The DNA structure looks just like a ladder, only this special ladder is not a normal straight ladder, it actually spirals! This spiral structure is called the double helix formation of DNA. This sounds so amazing, wouldn’t you like to look at your human DNA under a very strong microscope? Your body is made out of millions of cells and in each of these cells there is a nucleus (the centre part of each cell in your body). In the nucleus there are 46 chromosomes (butterfly-shaped structures), and it is here in the chromosomes, where long strands of DNA ladders are hidden.

What is DNA made of and what does the DNA structure look like?

Discover what DNA is made of and explore the DNA structure by going on an adventure with Mr. Elephant:

Let us use our imagination so that we can visualize all the parts of the DNA structure. I am going to tell you a story about Mr. Elephant who came to visit me in my laboratory. Once upon a time a huge elephant came walking into my laboratory; he asked me if I could shrink him, for just one day, so that he could feel really small for once in his life. I shrinked Mr. Elephant with my shrinkenator shrinking machine so that he was so small that I had to search for him with my microscope! Mr. Elephant loved this new microscopic world, everything looked gigantic next to him. He came to stand next to a spiralling ladder (DNA structure) that reached far up into the sky. This was an amazing thing to see for Mr. Elephant, never in his life has he ever seen a ladder that was big enough for him to climb.

He noticed that the colours in the nucleotide bases of the ladder steps were arranged in different sequences. Each set of sequence was called a gene. Each gene has a special job to do in your body. The DNA in a gene spells out specific instructions for making proteins (molecules that do important work in your body such as fighting infection or carrying out chemical processes in the body). The connection of DNA, the genes in it, and the protein that these genes make is very similar to the connection between a cookbook, recipe, and a cake. Where the DNA is the cookbook, a gene is the recipe, and the protein is the cake.
Mr. Elephant thought that he would rest for a while and curled his long trunk around one of the steps made with the two nucleotide basis and fell fast asleep. At last I found Mr. Elephant with my microscope, I switched my shrinkinator in reverse and turned Mr Elephant back to his normal size. Mr. Elephant jerked awake with a jolt and a big smile. He said that he was so glad that there are no ladders in the non-shrinked world that just goes on for miles and miles.

I hope that you enjoyed the story and that Mr. Elephant helped you to visualize the structure and the different parts of DNA. Now you know that when someone asks you “what does DNA mean” , you can tell them all about it, and how DNA carries all the information of what makes you, you. Wouldn’t you like to try an experiment to extract some DNA?