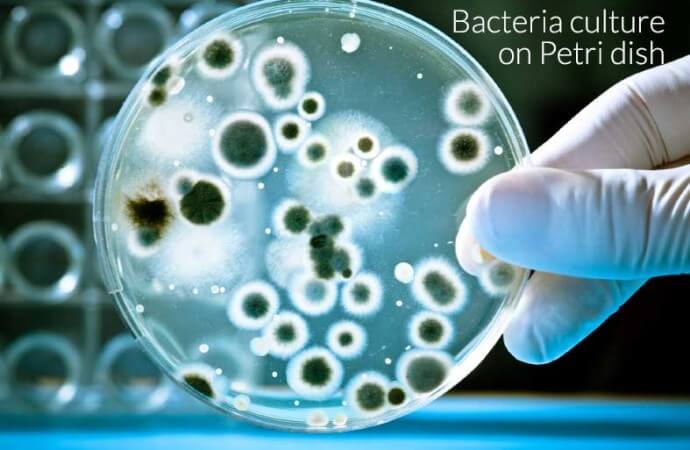 Swimming, floating and microscopically small…they are everywhere! Even in the deepest sea vent and in boiling hot water springs. Do you know what bacteria are? Sometimes we ask “what is bacteria?”, but bacteria is actually a plural (more than one) of bacterium (one bacteria). Bacteria are microorganisms (too small to see with your naked eye)

Swimming, floating and microscopically small…they are everywhere! Even in the deepest sea vent and in boiling hot water springs. Do you know what bacteria are? Sometimes we ask “what is bacteria?”, but bacteria is actually a plural (more than one) of bacterium (one bacteria). Bacteria are microorganisms (too small to see with your naked eye) that can be found everywhere on earth, even in your own body!

Let’s look at the definition of bacteria. Bacteria can be defined as a very big group of microorganisms that are placed in one of three categories of living organisms. They are prokaryotic and are unicellular (one celled). A prokaryotic organism is an organism that has a single DNA (molecules that hold all the genetic information of an organism) strand. The DNA in a prokaryotic cell is not in the nucleus (centre of cell).

Bacteria can be categorized by looking at different characteristics! Let’s look at a few of these characteristics. On earth there are lots of different types of bacteria. They differ in shape, size and function.

Bacteria can be characterized by shape. The three main shapes of bacteria is coccus (spherical/round), bacillus (rod-shaped), and spiral shaped. You can also get bacteria that have other shapes, such as the bacteria named amoebae. This bacteria looks just like a moving blob and we say that it has a pleomorphic shape.

When we look at the different ways in which bacteria move, we can also characterize them. Some bacteria move by using cilia, these are hair like structures that push against the surrounding material to make the bacteria move forward. An example of a bacterium that uses cilia is a paramecium. Bacteria can also move by using flagella. Flagella are hair-like structures, used by some bacteria so that it can be propelled forward. Protozoan (bacteria that are usually single celled and uses carbon for energy) group Mastigophora, is an example of bacteria that uses a flagellum.

Heterotrophic bacteria, are those bacteria that cannot make their own food, so they need food such as dead plant leaves.

Different types of bacteria use different ways to reproduce (make more bacteria or multiply). Bacteria can reproduce in different ways such as budding (a small cell that are attached to the mother cell forms and is then released) and binary fission (The cell makes another DNA molecule, the cell grows and it divides).

Did you know that you get bacteria that are good and can help your body? Other bacteria can make you very sick! Examples of good bacteria are Lactobacillus delbreuckii bulgaricus and Lactobacillus delbreuckii lactis. These bacteria can be found in yogurt and when you eat it, goes into your stomach and intestines. These bacteria in the stomach and intestines can help your body to break down milk and sugar.

As you can see, bacteria can be good or bad to your body. To make sure that you get good types of bacteria in your body, you should eat lots of yogurt. Tell me what your favourite flavour of yogurt is!