A Romp Through a Rainforest 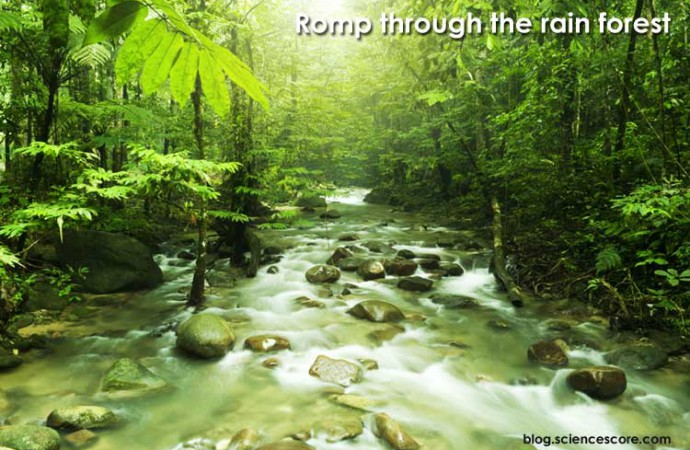 Hey kids, do you know where you can find more living things in one place than anywhere else in the world? In a tropical rainforest! Rainforests are exactly what their name suggests: warm, dense forests that are very wet.Tropical rainforests are found close to the Earth’s equator, and they are home to millions of plant

Hey kids, do you know where you can find more living things in one place than anywhere else in the world? In a tropical rainforest!

Rainforests are exactly what their name suggests: warm, dense forests that are very wet.Tropical rainforests are found close to the Earth’s equator, and they are home to millions of plant and animals. In school science, we can learn the four layers of the rainforest.

Towering above all the other parts of the rainforest are emergents: giant trees taller than any other in the rainforest that stick up above their neighbours. Emergents are homes to many birds and insects.

The canopy is the leafy part of the rainforest, made up of the tops of the trees. The canopy grows so thick and close together that rain falling on it can take 10 minutes to reach the ground! Many amazing plants and animals are found here, including sloths. Sloths have long toes that they use to hang upside down from branches; they spend most of their lives upside-down, and will eat, sleep, and even give birth upside down! Sloths are also famous for being the slowest animals on earth. They are so slow that algae grows in their fur and turns them green!

Under the canopy but above the ground is the understory of the rainforest. It consists mainly of the trunks of trees and the vines and other plantlife that grows over them. Many flowers grow in the understory, and thousands of birds and butterflies find their food there.

Finally, we reach the lowest part of the rainforest: the forest floor. It is home to millions of insects, and some of the largest animals in the rainforest also live there.

School science tells us that it’s important to preserve the rainforest because of all the plants and animals that live there, but one of the most interesting facts about rainforests is that the trees also provide much of the air that we breathe! Rainforests are also important because the cures to many illnesses have been found in the plants that grow there.

Here are some other interesting facts about tropical rainforests:

The largest butterfly in the world is the Queen Alexandra’s Birdwing butterfly from the rainforests of Papua New Guinea. This massive butterfly has a wingspan of 30 cm, and it’s also poisonous! The caterpillars eat a poisonous rainforest plant, which means that any predators that try to eat a Queen Alexandra’s birdwing get very sick, and soon learn to leave all of them alone.

The rainforests of Sumatra are home to the largest flower in the world – which is also the smelliest. The corpse flower has a blossom over a metre wide, and it gives off a stench like rotting flesh that can be smelled up to 800 metres away!

The Congo rainforest in Africa has its very own unicorns! Okapi are deerlike animals related to giraffes, with striped legs like a zebra. They have two horns on their heads, but if you look at an okapi from the right angle, the two horns look like one. This earned them their nickname of “African unicorns.”

And the coolest thing about rainforests is that there are so many plants and animals in them that we haven’t discovered them all yet! Maybe you can visit a rainforest and discover a new species someday.