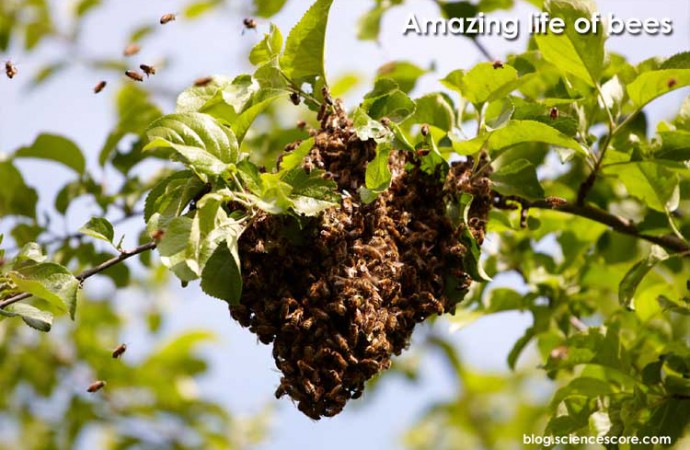 Hey kids, do you have any brothers and sisters? Imagine living in a house crammed wall-to-wall with thousands of your sisters, and you have a bit of an idea of what it’s like to be a honey bee. A working bee hive in the summer can be filled with thousands of bees, and if you

Hey kids, do you have any brothers and sisters? Imagine living in a house crammed wall-to-wall with thousands of your sisters, and you have a bit of an idea of what it’s like to be a honey bee. A working bee hive in the summer can be filled with thousands of bees, and if you look closely (with the help of a trained beekeeper, of course!), you might discover three different kinds of bees – it’s discoveries like these that make science fun!

The only male bees in the hive are called drones; they’re big and fat, they can’t sting, and have to be fed, cleaned, and cared for by their sisters. There are only a few of them in the hive, and their only job is to mate with new queens. That may sound like a nice, easy life, but in the winter, their sisters kick them out of the hive to freeze. Ouch!

There are two kinds of female bees. The biggest bee in the hive is the queen, and there’s only one. She’s big because her body is filled with eggs; the queen is the mother of the hive. On a busy summer day, one queen can lay up to 2,000 eggs.

Most of the bees in the hive are worker bees. Worker bees are all females without eggs, and they take care of all the work that needs to be done.

A worker bee’s life begins as a tiny egg. The egg hatches into a white larva, like a small worm or caterpillar, and for the next seven days or so, all that bee larvae does is grow and eat. Once it grows big enough to fill its cell in the honeycomb, an adult worker builds a cap of wax over the opening to the baby bee’s cell, and that little larvae turns itself into a pupa. A pupa is a little bit like the cocoon of a moth, and inside that pupa, that baby bee is changing from a shapeless white blob into a grown-up bee, with legs, wings, antennae, and a stinger. One good thing about learning science online is you don’t have to risk a nasty sting!

When the change is finished, the new bee chews its way out and gets to work. The youngest bees start their lives cleaning up the hive, licking the cells clean with their tongues and carrying out bits of debris with their strong jaws.

Older bees have the job of nursing the baby larvae, bringing them the food they need to grow strong. Sometimes nurses have the job of feeding special larvae full of a substance called royal jelly. This will make the larvae turn into queens instead of a workers. To make sure they get a good strong queen, the workers will feed several larvae with royal jelly, and the new queens will fight to the death when they hatch! The queen who lives takes over the hive.

After they grow out of nursing, older bees will move to the entrance of the hive and become soldiers, guarding the hive from any invading insects that might eat the larvae, and stinging anything that tries to attack the hive. They will only sting if they have a good reason, though – once a honeybee stings, she dies.

The oldest bees are the foragers. Their job is to travel away from the hive to bring back nectar and pollen to turn into honey. It’s an important job, but it’s also a dangerous one – in the summer, an adult bee lives about two weeks.

It may be a difficult life, but the end result is a hive full of golden, sticky honey. It’s food for the bees in the hive, and it’s also a tasty treat for us! Now that’s a sweet idea.