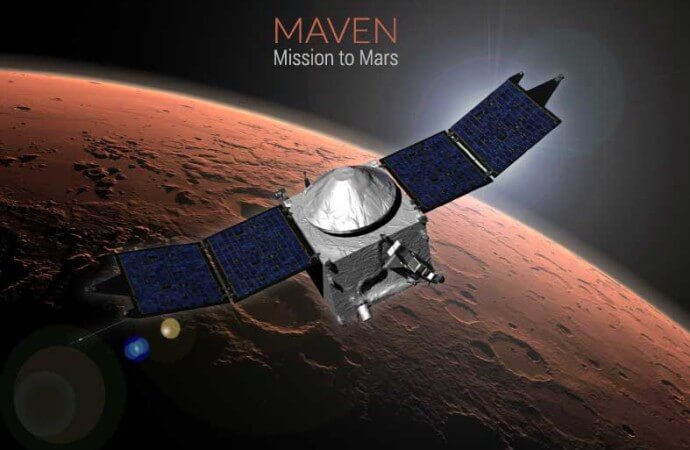 Have you ever looked up into the night sky and wondered what’s out there? What would it be like to be on another planet, or another galaxy? Are there planets like our Earth, and maybe even other forms of life out there? Most of us grow up wondering, and a few even make it their

Have you ever looked up into the night sky and wondered what’s out there? What would it be like to be on another planet, or another galaxy? Are there planets like our Earth, and maybe even other forms of life out there? Most of us grow up wondering, and a few even make it their life’s work to try to find answers to these big questions.

Last year, NASA launched a rocket to send a special probe to Mars, the mysterious red planet that has captivated the imaginations of people for hundreds of years. The spacecraft they launched is called MAVEN, or the Mars Atmosphere and Volatile Evolution spacecraft. Its main job is to travel to Mars and collect samples of the Martian atmosphere to find out what happened to the air and water that was once on Mars.

MAVEN was successfully launched on November 18th, 2013, and is planned to travel for 10 months to arrive in the orbit of Mars in September this year (2014), so this is both past and future news! The main goal of the now solar-powered probe is to find out where all the liquid water and atmospheric gases that used to exist on Mars have gone. Samples of the atmosphere and other readings while in orbit will help NASA scientists to understand more about the climate history on Mars, as well as the composition of its current atmosphere. Although MAVEN is an unmanned spacecraft, the organization is planning human missions to Mars in the 2030s and needs to collect data about the planet to help prepare for these missions.

The climate on Mars has changed dramatically over time, and the major part of the MAVEN mission is to find out more information on why and how things changed. Mars has frozen water at its poles, but no liquid water at the surface has ever been observed. However, previously launched surface rovers Opportunity and Spirit that landed on Mars in 2004 picked up and analyzed samples of rocks and found minerals that form only when water is present. The surface of Mars also shows some distinct features of erosion by liquid water that give clues to the planet’s past. Scientists believe that Mars was once warm and wet, but now that it’s dry and cold, they want to find out what happened to cause such extreme changes.

Scientists don’t expect to find life on such a dry and cold planet, but they are curious to find out if there was ever life, however basic or small, in the history of the planet. Some rovers are now looking for fossils and other traces of life to see if they can’t find Martian bacteria!

How’s the Weather on Mars?

Mars has a much thinner atmosphere than the Earth, and it’s made up mostly of carbon dioxide, while ours is mostly nitrogen. This different atmosphere, and the planet’s further distance from the sun, makes weather on Mars very different from weather here at home. For example, surface temperatures can change by over 100 degrees Celsius in the course of a single day, since there is no liquid water and the thin air can’t hold enough heat. When the sun shines on Mars, it can heat up to about 35?C, while in the dark at the poles temperatures can reach -153?C. That’s a lot of temperature change to pack clothes for!

Winds can whip up huge dust storms and the tiny bits of fine dust can stay up in the atmosphere for days. When dust gets pushed up as high as 100 km above the Martian surface, water vapour can form droplets and fall as rain or snow. However, this rain and snow doesn’t reach the Martina surface – it evaporates before it reaches the ground. Huge dust storms on the surface of Mars can be seen from the Earth using telescopes.

Mars also has distinct seasons just like the Earth. Seasons happen because the planet’s axis, the invisible pole that it spins around, isn’t exactly up and down, but instead is tilted a bit to one side. This makes part of the planet tilt away from the sun during part of the year (winter) and towards the sun at another time of the year (summer), and temperatures change with the seasons.

History of Missions to Mars

So far, 50 other missions have been launched to fly by, orbit, land on, or slingshot past the red planet. MAVIN is the 51st, and hopefully a successful mission, since only 17 of these missions has managed to get equipment to where it should be, and 2 of them failed early!

If you were to plan a mission to Mars, what would you look for?